Take a look at the replacement to the F1... 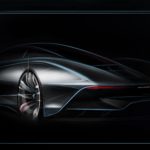 McLaren have released a new teaser of its next hypercar as the successor to the P1 and the F1 before it. The new flagship McLaren is a three-seater and is codenamed BP23. It will be the latest member of the car maker’s ‘Ultimate Series’ and has been hailed the ‘spiritual successor’ to the F1.
Read More ... The 60-year old star of BBC comedy Blackadder sold his beloved super car in what has been described as one of the UK’s biggest ever vehicle deals.

Despite crashing it in 1999 and slamming it into a tree in 2001, Beano managed to rebuild it and actually increase the value. Nice one. Wish we could do that with our Ford Focus.

The Johnny English star, who is well known among family, friends and local thieves for his car collection, said: “It is time for it to be enjoyed by someone else. I bought it for the [...]

McLaren F1 takes on the MP4-12C on track

Watch here to see how the new McLaren MP4-12C compares with the older, more focused F1 racer. In a rare opportunity, Steve Sutcliffe takes them both on track to see where the similarities start and the differences end. Because even if you’ve never set foot in a single-seater, it’s now possible to drive one of the best ones out there. The very same one in which Kimi Raikkonen won the Abu Dhabi Grand Prix in 2012, in fact. You know the one. “Leave me alone, I know what I’m doing. Yes, yes, yes.” That one. One of the last proper, V8-powered F1 cars before everything went electric and [...]

Could this be the best car wash ever? In a new stunt for Mobil 1’s ‘Get Personal’ campaign, unsuspecting customers at a South East London car wash are surprised by a pit crew, hot models and a McLaren Formula 1 car waiting in the queue with 2009 world champion Jenson Button at the wheel.

After an exciting start which saw Rosberg, Hamilton and Alonso improve on their start positions, Vettel regained his lead and made a dash for it. Lotus said goodbye to the V8 engine in spectacular style when Grosjean was forced to retire due [...]

An F1 look back: The 2005 United States Grand Prix

With just four races left of the current F1 Championship, there was still a mathematical chance for the title race between Fernando Alonso and Sebastian Vettel to stay alive.

It would be the last visit to the Buddh International Circuit on the F1 calendar for now, due to political and financial implications behind the scenes involving many different parties, but the racing was the main focus of what the drivers and teams were there for.

The big news heading into the weekend was that Scuderia Toro Rosso had announced their second driver that would pair with Jean-Eric Vergne in 2014. Russia’s 19-year-old racing sensation, Daniil Kvyat, who is currently racing in GP3 and the FIA F3 European Championship, got the nod by the Faenza-based squad to step up to the top flight of single-seater racing via the Red Bull Junior program.

There was a lot of talk via Twitter about the youngster being given the [...]

The 5.807km track just based 80 kilometers southwest outside of Nagoya would be the final Asian round of the 2013 Formula One World Championship, before the title race would soon be concluded.

The land of the samurai has hosted a Grand Prix on the F1 Calendar since its first inclusion as a non championship round in 1963, along with Fuji Speedway hosting its own fair share of races, before the 10-year hiatus came to an end in 1986. With speeds anywhere between 65 to 320km/h, as well as g-forces being rather high, a driver will have to pay as much attention as possible to make it count

This track is a true test of man and machine, with the Pirelli tyres having to combat the very abrasive surface, as well as the drivers having to manage the Pirelli P-Zero compounds as best they [...] The 2007 world champion started from seventh on the grid and used a clever pit stop strategy to secure victory by more than 12 seconds over Ferrari’s Fernando Alonso. Reigning world champion Sebastian Vettel finished in third overall in the Infiniti Red Bull Racing, putting two Renault-engined drivers onto the podium

Raikkonen graduated to fifth off the start and made an early change to the medium compound tyres on lap nine. He completed a long stint on this set of rubber and, despite two light rain showers, stayed out longer than his closest rivals. The Finn returned to the pits on lap 34, after which the strategy unfolded perfectly as Alonso, Hamilton, Massa and Vettel made one further stop, leaving Raikkonen out in front.

Vettel converted his pole position into an immediate lead but likewise made an early switch to the medium tyres. [...]