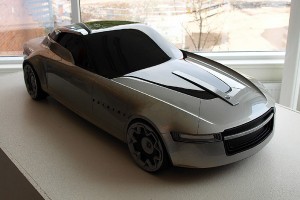 Eccentric luxury car maker Bristol Cars was snapped up by EV specialists Frazer Nash back in April 2011 when the former entered administration.  Now British automotive design student Amarpreet Gill has imagined what the first new Bristol since the V10-engined Fighter might look like — and he’s chosen to relaunch the brand with an EV.

Let’s state up front that this is NOT an officially sanctioned design concept from Bristol, but an independent study from Gill, who is studying for a Masters in Transportation Design at the Umea Institute of Design in Sweden.

Building on the ‘Gentleman’s Express’ theme that Bristol has followed since 1945, Gill envisions the new car would use in full the expertise of Frazer Nash and its parent Kamkorp Autocraft in the area of Electric Vehicles — Kamkorp previously owned the recently defunct Think Global EV company and also showed the Frazer Nash Namir range extender hybrid at the Goodwood Festival of Speed in 2009.

Picking up styling themes from the Bristol 411, 603 and subsequent derivatives (which survived as the Blenheim right up until this year), the look of the un-named concept will no doubt split opinions — but then Bristols frequently have.

No less controversial is the drivetrain, which the student says would be “a combination of piezoelectric and photovoltaic wizardry to create a platform that harvests energy from the surrounding environment, rewarding the consumer with the gift of free energy, that can then be used, shared or sold.”

Frazer Nash’s involvement with Bristol resurrects a relationship that started over 65 years ago when the company was involved in Bristol Car’s foundation.  The new owners of the marque have previously revealed their plans “to combine Bristol Cars’ tradition and iconic marque with Frazer-Nash’s pioneering technology to showcase our cutting-edge electric and range-extended powertrains.”  Further announcements as to what precise form these plans will take should come soon — as, we assume, will news on whether Amarpreet Gill will be any part of them.

For all leasing, finance or cash enquiries regarding vehicle purchase, contact our sales team at OSV