Ever thought of wearing your Ford rather than driving it? Ford cars become couture 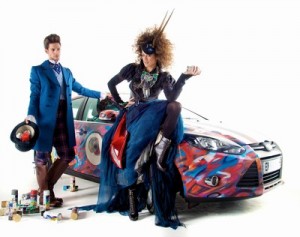 Ever thought of wearing your Ford rather than driving it?

Well, no, we hadn’t either. Or at least not until we saw Ford’s latest photos from their UK centenary celebrations.

As part of Ford’s recognition of 100 years in Britain, this specially commissioned couture is part of celebrations that reached an apex with the parade of 100 iconic Fords at the Goodwood Revival earlier this year.

Both the dress and necklace are made from Ford car parts, by two young British designers.

Sally Clark, a nominee for Scottish Designer of the Year, was perhaps prepared for taking on this unusual proposition by working with the late Alexander McQueen.

She took her inspiration from the Edwardian period, in keeping with the date, 8 March 1911, that Ford opened their first UK office in Shaftesbury Avenue.

Designing the necklace proved to be extra challenge at first, as the designer, who owns her own line, Creme Noveau, doesn’t drive.

However, although she was somewhat daunted at first, she found the unusual shapes and materials of the car parts to be particularly inspiring.

Looking to the future

Ford is intending to continue their track record of innovation with a series of new technologies.

It also doubles as an electronic personal assistant, reading out text messages and diary reminders.

Ford are looking at bringing their first electric vehicles to the European market too.

The Ford Focus Electric will have zero CO2 emissions and a range of 96 miles, along with all the latest smart technology and safety features of the new Ford Focus.

At the Geneva Motor Show earlier this year, Ford unveiled three new vehicles. The B-Max is distinguished by its unique sliding doors, while the new Ford Ranger Wildtrak incorporates a rugged appearance, dependability and the latest driving technologies.

The Ford Vertrek, a concept SUV, showcased the company’s vision for combining an impressive powertrain with tough off-road capabilities and green driving.

If you’re interested in buying or leasing a new vehicle contact our sales team. Alternatively, visit our website where you will find new and used Ford’s available for sale or on finance.