Introducing the new CAP Used Car Of The Year… 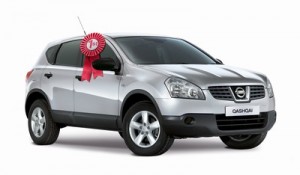 Nissan is delighted that’s its popular crossover, the Nissan Qashqai, has been voted CAP’s ‘Used Car of the Year’ again. It also took the award in 2010.

This follows on from the Nissan’s Qashqai’s victory at the WhatCar? awards last month, where it was voted Best Used Car 2011 by the leading consumer magazine.

As the judging panel was made up entirely of CAP’s car pricing and valuation experts, the repeat award shows how strongly the Nissan Qashqai is performing in the current market.

Nissan’s people-carrier SUV crossover came in for voluble praise from the judges, not least for being a market leader in terms of automotive innovation.

Launched in 2007, the Nissan Qashqai was an entirely new breed of car, combining the practicality of an MPV with the looks of a 4×4, a recipe that has since been copied by many other manufacturers.

Judges described the Nissan as “the perfect car for our time”, as it brings economy, handling, reliability and build quality to the crossover package.

The Nissan Qashqai’s excellent residual value was singled out as a particularly strong feature.

Popularity with both trade buyers and private customers mean that the Nissan crossover holds its value well, since it is always in such strong demand, and noticeably outperforms the market as a whole.

In fact, the judges were so impressed with the Nissan Qashqai that they even said that in recent years its only real competition for CAP Used Car Of The Year has been the updated Qashqai model released in 2010!

Naturally, Nissan were delighted to receive the CAP Used Car of the Year honour again.

The managing director of Nissan GB, Jim Wright, says that victory proves that even in these tough economic times, the British motor industry can still produce winning vehicles.

Recognising the skill of British workers

The production of the Qashqai is an all-British effort, and Nissan are pleased to see the hard work of their British engineers, designers and production workers recognised.

Nissan employs over 5,500 people, with stylists in London, engineers in Bedfordshire and production taking place in Washington, Tyne and Wear.

After getting the award for CAP Used Car Of The Year, Nissan are planning on adding a new 1.6 litre Stop & Start engine to the Qashqai line-up, so that company car drivers are able to financially benefit from its reduced emissions.

If you’re interested in buying or leasing one of these CAP Used Car of the Year winners or another new vehicle contact our sales team. Alternatively, visit our website where you will find new and used Nissan’s available for sale or on finance.

CAP Used Car Of The Year- was it a good choice?