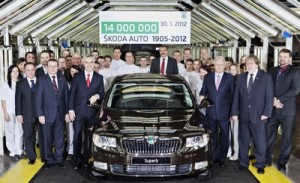 Skoda are celebrating producing their 14 millionth vehicle.  The whole of the Skoda range can be financed, leased or purchased.

The special car is a limited edition Skoda ‘Laurin & Klement’ Superb, from the Kvasiny Czech plant, and is destined for a German customer.

Skoda are delighted by passing the impressive landmark, seeing it as an expression of their dynamic growth strategy, which will see new Skoda models released for purchase, lease and finance.

The dramatic rise of Skoda

Skoda have grown exponentially in the last decade, producing 4 million of those 14 million Skoda’s in the last five years.

This continues the Czech brand’s upward trend of the last twenty years, following its affiliation with the Volkswagen group in 1991.

A top Skoda spokesperson praised everyone at the company for their contributions, which have made this achievement possible.

Skoda have announced an ambitious growth strategy that involves creating and releasing a new model on average every six months during the next few years.

This started with the launch of the celebrated Skoda Citigo, for purchase, lease or finance in the UK, and the Skoda Rapid, designed for the Indian market.

Skoda are wisely focusing much of their energy on bringing their value for money, practical cars to the rapidly expanding emerging markets of China, India and Russia.

Exciting new developments for the buoyant Chinese market include the Skoda Yeti, a compact SUV that will be produced in partnership with Shanghai Volkswagen.

The brand will commence production of a new compact sedan in China at the beginning of 2013.

2011 saw a new plant open in Russia, in addition to the existing Kaluga factory, while the Rapid is being successfully manufactured at Skoda’s Pune factory.

A timeline of success for Skoda

If you’re looking to purchase or lease a new Skoda contact our sales team. Alternatively, visit our website where you will find new and used Skoda’s available for sale or on finance.