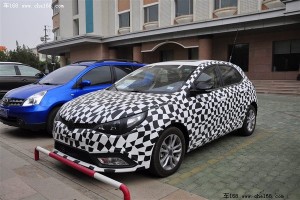 With the MG6 GT and Magnette launches out of the way, SAIC owned MG is now working on its next two models — the MG3 supermini and this, the MG5 compact hatch.

Sharing its underpinnings with the Roewe 350 — both Roewe and MG are owned by Shanghai based SAIC, now the world’s eighth largest car maker — this is an all new platform and places the MG5 in the same sector as the Ford Focus, Vauxhall Astra and VW Golf.  Engines will be a four cylinder 1.5 petrol with about 105bhp, which may also come with a light pressure turbo for around 150bhp.  It’s likely the forthcoming in-house four cylinder 1.9 diesel, being developed by MG at Longbridge, will also find its way under the bonnet, as may the 92bhp 1.3 from the MG3.  Six speed manuals and automatics will shift the gears, although a seven speed dual clutch gearbox is rumoured for the turbo.

Its sister car the Roewe 350 is famous for having debuted a sophisticated Google Android based in car entertainment system, which may also find its way into the MG5, offering voice activated controls and Google Maps with Street View for the satnav.

The MG5 may yet to be shown in production form — we saw the concept at April’s Shanghai motor show — with sales in China starting in 2012.  It will be 2013 before the UK sees the car, when the price is expected to be about £12,000.

For further information on MG or any other MG please contact our sales team.   Our website has new and used cars for sale or on finance – choose from over 30 different manufacturers.

Thanks for visiting us.