A Massive Review Of The Porsche Boxster: Features/ Price/ Comparison 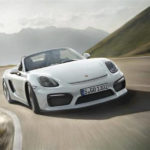 The new Porsche Boxster Roadster is claimed by many to be the best all-rounder in this sector. There are no denying its strengths - powerful engines, crisp handling, and surprisingly low running costs. Even better, it’s what you could even call affordable. The Boxster has been setting the standards against which all other small roadsters are measured for quite some time now. Unlike its rivals, its engines are plonked in the middle, which is good for balance. It comes with a fabric roof which folds down in less than ten seconds so that you can enjoy the sunshine out on the open road, and it’s also practical. If you’re finally in a position to afford a Porsche and quite fancy a racy sports car, join OSV as we take a closer look at what the new Porsche Boxster Roadster is all about.
Read More ...
718 boxster roadster, porsche