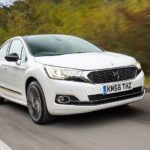 Based on the C4, the Citroen DS4 is a light, more compact edition that gives the driver the command of the road. It’s slightly taller than its “older sibling” by 40mm but 60mm shorter and 20mm wider, spotting a flexible slanting rear beam, giving it the stability that is buoyed by a front suspension typical of a MacPherson and a hydraulic power steering.Living up to the stringent Euro 5 emissions requirements, the Citroen DS4’s engine is a wide and very flexible affair with options such as a 1.6-litre diesel with between 110 and 160bhp HDi powerplants. The DS4 comes with other variations at the engine section. Citroen co-developed with BMW three 1.6-litre petrol engines for the DS4: the 120bhp VTi which, sitting under two engines, gives a decent edge over Peugeot's RCZ sports car; the 155bhp; 200bhp THP units that serves up to 275Nm of torque.Whichever engine you go for, you still get to have the Citroen's six-speed electronic transmission. All this comes along with a conventional manual alternative.
Read More ...
DS, ds 4 hatchback