The Flying Car that could be available for purchase this year

The future is now 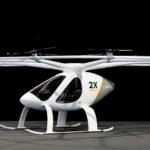 It’s something you thought you’d only see in utopian sci-fi movies but later this month the first ever production-ready flying car is due to be shown at the most exclusive supercar show in the world, the Top Marques Monaco. The vehicle was first revealed as a concept back in 2014 and has been built by AeroMobil, a Slovak pioneering company. The vehicle is fully functional as both an aeroplane and a four-wheel car and is powered by hybrid propulsion with the wings sweeping back against the body when it is in driving mode. The vehicle is alleged ‘production ready’ with motor authority reporting that it has a Rotax 912 four-cylinder air-cooled engine with 100 horsepower and a top speed of 124mph in the air. On the road it can supposedly reach 99mph with a mpg of 35.3. Apart from that, technical details are slightly thin on the ground. However, we expect more details to be revealed closer to the show.
Read More ...
aeromobil, flying car, industry news