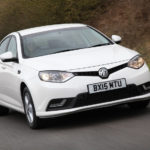 It’s been four years now since the MG6 was first launched, and back then it was seen by many as the car which would herald in a new dawn for the then-flagging British brand. To be fair, it did welcome in a new era, though some critics sniped that it isn’t really totally British because the kits from which it is assembled were developed in China. Still, this five-door hatch is now in its second generation and is here to keep the British flag flying for one of this nation’s most well-loved brands. Let’s take a closer look to see what it offers.
Read More ...
mg motor uk, mg6 gt diesel hatchback