Fighting off fierce competition, the original Mini made the top spot... 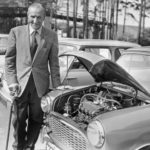 The original Mini has been named the best British-built car of all time according to Britain’s most influential car bosses and Auto Express. The original Mini beat the likes of the E-Type Jaguar and the Land Rover Defender to the top spot after a rigorous voting process to find the best-British built car.Beating 75 models that rolled off production lines in the UK, the judges were asked to pick their top 10. This was to be based on sales, groundbreaking design or unbeatable performance. Judges included Aston Martin CEO Andy Palmer and Ian Robertson, BMW’s sales and brand board member.
Read More ...
industry news, MINI, original Mini