A brief history of Range Rover

We take a look at how Range Rover became one of the top British cars of all time... 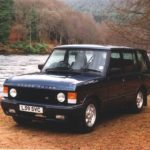 Range Rover has been named one of the top British cars of all time by Classic & Sport Car magazine and it’s hard to argue with it. But, how did Range Rover come to be? In this article we take a look at the history of the SUV manufacturer, from its conception to the present day.
Read More ...
a brief history of range rover, Learning Centre, range rover

It might come as a surprise to many, but the original Range Rover Sport, the Range Rover Sport’s predecessor, was the company’s top selling car between 2005 and 2012. Consumers loved the idea of owning a Range Rover but simply couldn’t afford it. Not only did the Range Rover Sport offer an affordable alternative, but it was also enough to satisfy customers who also wanted an injection of something sportier in their life. What held the model back, though, was certain drawbacks; it was a bit wet behind the ears, a bit naive. This second generation version is a big improvement; it’s bigger, tougher, lighter, more accurate, sharper.

Whilst the SUV sector is dominated by German manufacturers, including BMW and Mercedes, the used Range Rover Sport is certainly capable of giving them a run for their money. Whereas the German’s don’t have to be all things to all men, the Range Rover Sport HSE pretty

Don’t be fooled: Although the new Range Rover Evoque hatchback might look very similar to its predecessor, a lot has changed underneath the skin so that this rugged beauty is now a very different, very mightier proposition. Efficiency is much better, an exciting new fleet of diesel units have been introduction, and equipment is improved. As such, this SUV hatch continues to set all the important precedents in its sector.

Naturally, its rivals were waiting for Land Rover to trip and stumble because surely the Evoque couldn’t keep being this good. But are the changes that have been implemented enough to keep the buyers happy? Let’s take a closer look with our review.

A lot has changed at Land Rover in recent years. The Discovery Sport has all but replaced the ageing Freelander, but perhaps the biggest changes have come with the engines – namely the production

A Lesson For The Germans? Find Out In Our 2014 Range Rover Sport Review

As you may have guessed from its name, the 2014 Range Rover Sport is designed to offer a smooth yet exhilarating ride – along with the type of handling capability you would expect from a luxury SUV: especially one that comes from the Land Rover stable.

If you’ve done your research on car lease deals on vehicles in this class, you’ll have noticed that there’s no shortage of competition out there: most notably from the likes of the Porsche Cayenne and the BMW X6.

So what sets this particular car apart from the rest? There are three very good reasons why this particular Range Rover model warrants close attention: a smooth yet extremely capable drive; the ideal blend of comfort and practicality and last but not least – the fact that this car lets you get hold of a model from this extremely desirable manufacturer at a considerably lower price than the ‘standard’ Range Rover [...]