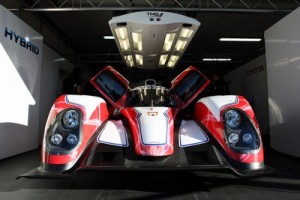 Toyota racing are taking the Toyota reputation for green motoring technology to a new level, with the announcement that they will be racing two hybrid cars at Le Mans this summer.

The Toyota team is the first manufacturer to enter hybrid racing cars into the FIA World Endurance Championship, and it is expected that their developments will be eagerly watched.

The new TS030 HYBRID follows on from Toyota’s iconic TS010 and TS020 cars, both of which won top places during Le Mans during the 1990s.

A hybrid with a difference

The new Toyota TS030 is built around the innovative Toyota Hybrid System – Racing (THS-R) powertrain, the result of years of development.

Toyota’s Team Leader on the project, Hisatake Murata, says that the project was a totally different challenge to that posed by engineering hybrid systems for road cars.

Not only do Toyota need to compete with some of the most sophisticated automotive engineering on the planet, they also have to keep within the strict guidelines of the FIA.

One of the greatest challenges for the team was to maximise the energy regeneration from braking, which feeds the surplus energy from braking back to the electric motor, while not overstepping the FIA rules that mean they can only recover 500kJ between braking zones and can only send the recovered energy to two wheels.

The cutting-edge hybrid system is complemented by Toyota’s forceful V8 3.4 litre petrol engine, and the TS030 sports a carbon fibre chassis designed and produced at TMG.

On a test run at Le Mans earlier this month, the most powerful Toyota hybrid in existence gave an impressive performance, rewarding Toyota’s investment in low-emission technology.

Driven by a team including Alex Wurz, Nicolas Lapierre and Kazuki Nakajima, Toyota is hoping that this year’s Le Mans will showcase the performance capabilities of their hybrid technology.

They are hoping that not only will it show a hybrid racing car can compete with those entirely powered by combustion engines, but that it can actually deliver performance advantages too, for both lap time and fuel efficiency.

The hybrid system gives the Toyota team a distinct advantage on cornering, as energy recovered from braking can be released as the driver comes out of a corner, boosting acceleration.

And drivers of the 3.5 million Toyota hybrids sold worldwide might find themselves benefiting from Toyota’s big vision too.

Pioneering advances like Stop & Start engine technology were originally developed for the racetrack, so perhaps in a few years drivers of hybrid Toyota’s might find their cars have a racing edge.

If you’re looking to purchase or lease a new Toyota contact our sales team. Alternatively, visit our website where you will find new and used Toyota’s available for sale or on finance.