Volkswagen up! and Kia Picanto winners of TopGear Awards 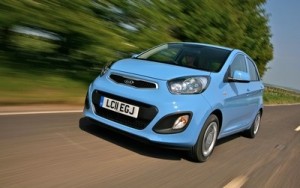 We’re taking a quick break from our Tokyo Motor Show coverage to check out some of the TopGear Awards winners.

The Volkswagen up! and Kia Picanto both grabbed awards. Kia Picanto is also celebrating its Chief Design Officer, Peter Schreyer, being named as one of the TopGear Men of the Year.

Volkswagen up! voted TopGear Small Car of the Year

The Volkswagen up! was praised for being “the cleverest small car around today” by TopGear judges.

Coming soon after the Volkswagen up! was awarded five stars and a EURO NCAP award for its innovative safety technologies, this is an impressive start for a car not even launched yet.

Orders are being currently taken for the first batch of Volkswagen up!s, which will be delivered to their owners in March 2012.

The Kia Picanto was particularly praised by the TopGear judges for its radical contribution to contemporary motoring.

Described as “a florescent metaphor for South Korea’s journey from the havoc of wartime to economic enormity”, the Kia Picanto proves that affordability doesn’t mean sacrificing desirability.

Kia took a risk in giving Peter Schreyer a free reign when he joined the company and started working on the Picanto’s design. However, the popularity of the hatchback has more than repaid their decision.

TopGear commended Schreyer’s “fortitude and skill” in creating the Bargain of the Year Kia Picanto.

The TopGear Awards are voted for by the magazine and TV show’s independently-minded staff.

What about you? Are these the cars you would’ve chosen as Small Car and Bargain Car of 2011?

Let us know your thoughts by commenting below.

If you’re interested in buying or leasing a new vehicle contact our sales team. Alternatively, visit our website where you will find new and used Volkswagen’s and Kia’s available for sale or on finance in the UK.