The Ford Transit now comes in four forms to cater for all kinds of loading requirements, with the 2015 Ford Transit Courier Kombi at the bottom of this particular automotive quarter. Ford say this van will be the last of the Transit’s, finishing of a project that first began 2 years ago to revamp their Transit range. It’s a purpose-designed van that will be competing against the Mercedes Citan Compact and the Citroen Nemo. Is it good enough to knock spots off its rivals? Let’s take a look and find out.

As mentioned, the Ford Transit Courier Kombi is at the bottom of the quartet of Transit, which invariably means that it’s the smallest of the four. With 4,175mm of length and 2,060mm of width, it’s not going to be able to compete for load space with some of its rivals, but Ford designers have done well to get the best out of what’s available. There is a 2.3 cubic metre load volume, whilst payload maxes out at 660kg – pretty much best in class.

The load bay has a 1,620mm load length, which means a Euro pallet can fit. A moulded bulkhead comes fitted as standard, whilst buyers get the option of adding a windowed steel bulkhead to improve visibility at the rear. If you don’t fancy paying extra for the steel bulkhead, you can go for a folding mesh bulkhead instead which opens to enhance the load length by just under an extra 1,000mm. If you do go for this option, your folding passenger seat loses comfort, but you gain versatility.

There are two diesel units on offer which make up the bulk of the engines, a 1.5-litre and a 1.6-litre TDCi power plant. The latter is a powerful engine that can easily shift a new Ford Transit Courier Kombi loaded with 140kg of payload without too much effort. Engine noise isn’t too bad. The solitary petrol engine on offer is a 1.0-litre EcoBoost which has always done a good job in Ford’s conventional passenger vehicles. If you’re looking to save a bit of cash here, this unit is the cheapest of the trio of engines on offer for the new Ford Transit Courier Kombi and comes with 99bhp.

Surprisingly or not, the Ford Transit Courier Kombi has a solid interior that is awash with quality and versatility. An adjustable steering wheel comes as standard, whilst if you go for the glazed bulkhead and rear doors, you’ll be treated to some awesome visibility. And because a lot of the switchgear is taken directly from the Ford passenger cars, you’re not going to be scratching your head at a lack of quality. Everything is sharp and contemporary, with the only downside being that the amount of buttons scattered around the dash look needlessly cluttered. Space is good though, and exceeds expectations, whilst storage spaces are dotted around the place so things don’t need to get messy inside your van.

The Ford Transit Courier Kombi price range starts out from around £11,045 and rises to about £12,445. Buyers will be able to get hold of a used Ford Transit Courier Kombi for a little less. Ford have gone to great lengths to ensure the reliability and safety of their Transit’s, and this particular one comes with stability control and ABS with brake assist and brake force distribution as standard. Other standard kit includes a driver’s airbag (although, weirdly enough, there is no passenger airbag), and Hill Assist Launch. As this is a commercial vehicle, you’d expect low running costs, and the 2015 Ford Transit Courier Kombi returns 76.3mpg whilst emitting 97g/km of CO2. These are its best figures and it’s safe to say it doesn’t disappoint.

The Ford Transit Courier Kombi is based on the underpinnings of a Ford passenger car, and as such drivability is impressive. Economy is also as good as you’d hope, whilst the cabin is both pleasant and roomy. The load bay is also another real joy here, particularly when you consider how small this van is. Ford have done a great job in working with what they’ve got, and the final piece in the Transit jigsaw is a worthy effort.

If you want to get hold of the new Ford Transit Courier Kombi don’t hesitate to leave us a message on our contact page, or give us a call on 01903 538835 to find out more about our Ford lease deals.

Looking to buy a Ford on finance but confused by all the options?
Our experts can help you find the perfect Ford Transit Courier Kombi Diesel Estate for your needs and budget.
REQUEST A CALLBACK
Similar Models 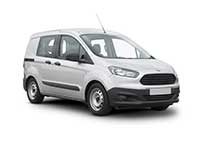 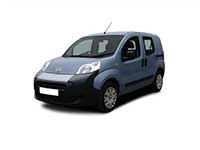 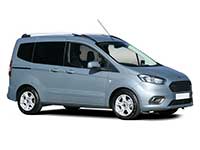 £16,045 - 17,125 +VAT
View Details
Have questions? Looking for a great deal on a new vehicle?
Help from a vehicle specialist is just a phone call away...
Get Started