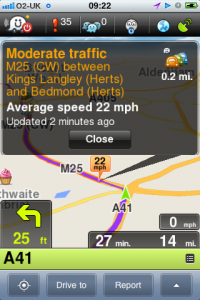 Israeli company Waze has launched a free GPS-based satnav system which works with market leading smartphones, including the Apple iPhone, Blackberry and Android-based phones including those from Samsung, LG, HTC, Motorola, Nokia and Sony Ericsson.

Satnav systems, even those that sit on mobile phones so don’t require dedicated hardware of their own, can be expensive — opt for the TomTom software for your iPhone from the App Store and expect to pay £60.  So a free alternative gets people interested.

Waze goes further though.  All users effectively make up a social network of drivers, reporting incidents and delays on to other users doing the same journey.  This is known as “crowd-sourcing” and means that a database of traffic updates, as well as roads and routes, is built up by the community that uses it, rather than up front and at significant cost.  That’s how the service can be offered for free.

I’ve done a couple of journeys with Waze, covering about 70 miles in total, and it’s not bad.  Not perfect — I’m used to ALK Technologies’ CoPilot Live satnav software for the iPhone which is every bit as good as the equivalent TomTom application and costs just £24 — but great for free and as more and more people use it the better the mapping and driving alerts will get.  That said, it still made me aware of delays on the Hertfordshire stretch of the M25 yesterday before I got to them, even telling me how far ahead the obstruction in the road was and the average speed for the section.  When I switched roads to ones less congested it picked it up quickly and plotted a new route, informing me of traffic levels and possible delays well ahead of hitting the hotspots.

The software works in the usual way, enabling you to search a database for matching locations before confirming your destination and plotting a route, showing alternatives when it finds them.  There can be a little delay between where you are and where it plots you on the easy to read map, but I liked that it swoops in low when you get to a junction or turning and need the detail, but when you’re out on the open road again it zooms back out to show your route some way ahead.

If you slow down it pops up a box with some options to tick to explain why you are delayed.  If it’s because of heavy traffic it asks you to rate the jam (light, moderate or heavy) and your contribution then goes into the database to alert other users heading for the same section.

If you do a regular journeys with other commuters you can form or join an existing Group, enabling information about the journey to be pushed out to all other Group users.  It’s a great way of alerting others to issues, including police patrols and delays.  Search on our “OSV” Group to share traffic information with other readers of this blog!

Biggest bugbear for me was that some of the pop-ups on the map were hard to fathom as a new user (average speed for a road section as collected from other users took some reading); and the accompanying voice-over seems to conflict with what the screen is showing when you get to roundabouts, frequently advising a left turn when I can see full well from the display that it’s not.  It would be nice to have more voice choices too, as it comes with a standard female voice which is pleasant enough but can get irritating after a while, especially when she’s getting confused at roundabouts.

The mapping also lacks Points of Interest currently, although this will probably improve as more people use it and contribute to the database.

But I’m likely to choose it over CoPilot for my journeys because it’s certainly up to the job and I’m keen to play my part in making it better, which will only come from me and others contributing to the database of routes as I use it.

Waze can be found in the Apple AppStore, Android Marketplace and Blackberry AppWorld.  It is free to download and use.

New vehicles are being launched all the time which OSV can offer excellent Contract Hire rates on – contact us for details.  Remember, we can also offer fantastic prices on car insurance and are offering 50% off servicing and maintenance costs.