The Scirocco is undoubtedly VW’s prettiest car. It was original launched in 1974 and was the most successful VW in class 795,650 units were sold up to 1992.

In 2008 the new VW Scirocco was launched. Order banks were already full, with people placing orders on it before they had even seen pictures.

The Scirocco is a truly beautiful well built car, a little cramped in the back but has a great range of engines.  If you’re a bit of a boy racer then the 2.0 TSI 210bhp is the one to go for!   Loads of  grunt and actually quite cheap to run, it’s the same engine from the Golf GTI and the Audi TT.

If don’t want a diesel and insurance is a worry then there is 1.4 TSI version. You may laugh at the 1.4 but it is turbo charged and still puts out 160 BHP!

If you are a company car driver then you may want to opt for one of the diesel engines. You can choose from either a 2.0Tdi 140 BHP or a 2.0Tdi 170BHP. They both churn out over 50mpg and have Co2 emissions of only 134.

If you prefer an Automatic, then all of the above are available with a DSG gear box. 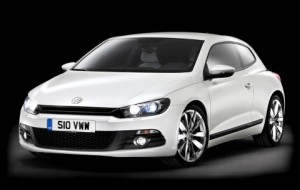 This car has had an average lead-time of over 4 months since it was  launched. With factory cut backs, the delivery is now 6 months! OSV have secured 3 of these rare cars for delivery in June.  So call us to secure now 0844 686 4000

Vehicles can be bought for cash or financed through contract hire.