A brief history of Peugeot

We look at the history of one of the oldest car manufacturers...

Peugeot are one of the biggest car manufacturers in Europe and have been around since 1810. Of course, they weren’t a car manufacturer then. In fact, they started off by manufacturing coffee mills and bicycles.

So how did Peugeot become the huge brand they are today?

In this article, we look at the history of Peugeot, from coffee mills to Groupe PSA.

When did Peugeot start making cars?

As we said above, Peugeot was founded in 1810 when the Peugeot family began manufacturing business. They started to produce coffee, pepper, and salt grinders.

Armand Peugeot introduced the Le Grand Bi penny-farthing in 1882 along with other bicycles. Peugeot bicycles actually continued to be built until quite recently.

After a meeting with Gottlieb Daimler, Peugeot was convinced of the profitability of going into the automotive industry. The first Peugeot automobile, a three-wheeled steam powered car was produced in 1889 and only four were made.

In 1890, steam was abandoned as it was heavy and bulky, and instead a four-wheeled car with a petrol-fuelled combustion engine was produced. It was built by Panhard under a Daimler licence.

29 cars were built in 1892 and by 1899, 300 were being built. Peugeot became the first car manufacturer to fit rubber tyres to a petrol car.

Peugeot were also an early pioneer in motor racing. Albert Lemaitre won the Paris-Rouen race in a 3 horsepower Peugeot. Three Peugeots were also entered in the Paris-Bordeaux-Paris race, which also marked the debut of Michelin pneumatic tyres in racing.

The first Peugeots were built in 1896 meaning that they were no longer reliant on Daimler, and was first fitted to the Type 15. The same year, Armand Peugeot broker away to form his own company, Societe Anonyme des Automobiles Peugeot. He built a factory at Audincourt to focus entirely on producing cars. Total sales for cars in France that year were 1,200, and 300 of those sales were from Peugeot.

In 1901, Peugeot debuted the “Bebe”, this was a one-cylinder, 5 horsepower vehicle that led Peugeot to place itself as a style leader and shrug off their conservative image.

What happened to Peugeot during the First World War?

Like all car manufacturers at the time, production was halted for the First World War. Peugeot became a major manufacturer of arms and military vehicles, producing bicycles to shells.

After the war, they got straight back into car production and jumped straight back into racing as well. Boillot entered the 1919 Targa Florio designed for an event that was before World War 1 yet the car won with one of the best drives of Boillot’s career.

When was the Peugeot 201 launched?

The Peugeot 201 was launched in 1929 and was the cheapest vehicle on the French car market. It was given independent front suspension in 1931. However, the depression hit soon after and car sales decreased, but thankfully the company still survived.

The vehicle was produced until 1937 and was produced in the Sochaux plant and is today sitting in the Peugeot museum adjacent.

The Peugeot 201 is often seen as the company’s first volume model and was presented at the 1929 Paris Motor Show. During the 1930s there were several variants of the Peugeot 201 launched and the engine capacity also increased. The 201C claimed to be the first volume produced car that was equipped with independent front suspension. This was then hastily adopted by fellow competitors.

When was the Peugeot 202 launched?

The car was formally launched in March 1938, accompanied by a dinner and presentation for the specialist press. A year previously, Peugeot carried out a survey amongst visitors to the Paris Motor Show to see what they would want in a small vehicle. This made for a huge amount of positivity before the launch of the vehicle.

The 402 followed shortly after, entering production in 1935 and continued until the end of 1941 despite Nazi occupation.

What happened to Peugeot after the Second World War?

Car production restarted in 1946 and restarted with the 202. The 203 was introduced in 1947 which had rack-and-pinion steering and hydraulic brakes. The 203 set sales records and remained in production until 1960.

The Peugeot 403 was introduced in 1955 and is probably most famous by being driven by TV detective Columbo. It had a 1.5-litre engine and sold one million units by the time it ceased production in 1962.

When did Peugeot take over Citroen and Chrysler Europe?

Peugeot bought a 30% share of Citroen in 1974 and took it over completely in 1975. This was after the French government gave large sums of money to the Company. Citroen was in financial trouble because it developed too many models for its financial resources, such as the Citroen SM.

PSA became a joint parent company to keep the Peugeot and Citroen identities but also while sharing resources. Peugeot also around this time briefly controlled Maserati, but they disposed of it in 1975.

In 1978, Peugeot took over the European division of Chrysler and the whole range was sold under the revived Talbot badge. However, Talbot branded passenger cars were later shelved in 1987.

When was the Peugeot 205 launched?

The 205 was launched in 1983 which was a supermini that was a huge success. It was often the bestselling car in France and was hugely popular in other areas of Europe, including the UK. Sales in Britain regularly topped 50,000 a year in the 1980s. It remained on sale in many places until 1998 even when the 106 was introduced. It ceased production in 1991 with the launch of the 206, which was also hugely popular.

The Peugeot 405 was launched in 1987 and was to compete with the Ford Sierra. It was successful, and was voted European Car of the Year. The 405 was a saloon and about 2.5 million of these vehicles were sold worldwide.

In 2006, Peugeot Citroen PSA announced they were to close their facility in Coventry, England. This resulted in a loss of 2,300 jobs as well as 5,000 jobs along the supply chain. It closed its doors in January 2007 after finishing production on the Peugeot 206 in December.

In 2007, Peugeot were active in 72% of market segments, something that they want to increase to 90%. Peugeot started to pursue new markets with a focus on China, Russia and South America. They re-entered the Indian market after 14 years with a new factory in Gujarat.

In 2013, there were rumours that Chinese investors were rumoured to invest in the company. The following year, the Peugeot family agreed to give up control of the company, reducing their stake to 14% from 25%. Dongfeng Motors and the French government were to buy 14% stakes each in the company. This gave three partners equal voting rights. In 2014, Dongfeng Peugeot-Citroen announced they were building a fourth factory in China, aiming to produce SUVs and multipurpose vehicles.

When was the Peugeot 3008 launched?

The Peugeot 3008 was unveiled in 2008 and is a compact crossover. It was introduced in Dubrovnik, Croatia and went on sale in April 2009.

While it had its styling criticised, the Peugeot 3008 was positively received and won Car of the Year by What Car? in 2010 and Semperit Irish Car of the Year in Ireland in the same year.

The new 3008 was unveiled in 2016, ready for sale in January 2017. This was a huge opportunity for Peugeot to become the highest selling range of vehicles in the industry. The new 3008 was awarded the CarBuyer Car of the Year in 2017 as well as winning the best in the SUV category. It won European Car of the Year in March 2017, the same day the PSA Groupe announced they were to buy General Motors Opel division for $2.3 billion.

When was the Peugeot 5008 launched?

The 5008 is a mid-sized crossover SUV that was first unveiled in the summer of 2009 for November launch. There are five and seven seat versions available.

It shares its structure and mechanical components with the Citroen C4 Grand Picasso.

The 5008 was also hugely successful, and was awarded MPV of the Year by What Car? magazine. It’s available in eleven countries in Asia and the Middle East as well as North Africa, South America and Europe, excluding Ukraine and Russia.

The second generation is to compete with the Hyundai Santa Fe, Skoda Kodiaq and the Honda CR-V.

And that brings us to the present day. Peugeot recently unveiled their Vision Gran Turismo concept. This is a L750 R Hybrid Vision Gran Turismo built for racing in the Gran Turismo sim series. It was also even more recently in hot water due to an advert that graced our screens. The advert for the Peugeot 208 has since been banned after it showed a driver reacting to a text message on the dashboard screen in the vehicle. Despite this minor setback, Peugeot are going from strength to strength, becoming one of the main players in the affordable SUV market. 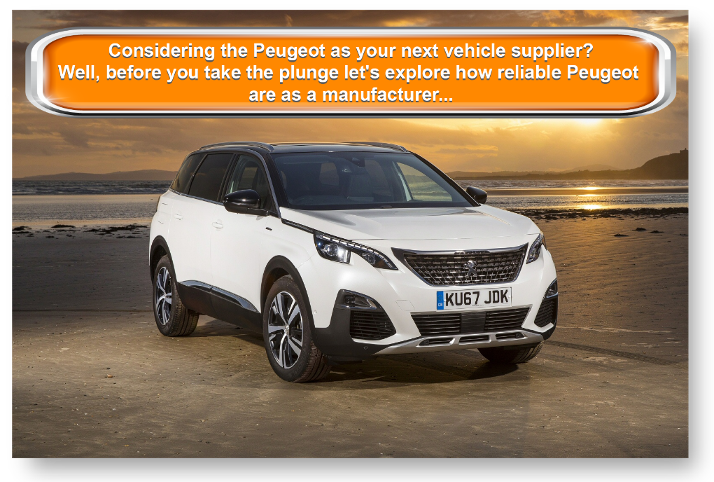