After driving many Executive cars including Mercedes, BMW and Audi who rule the roads when it comes to mass production and luxury driving, the OSV office was not sure what to expect when Jaguar Cars told us they were delivering a Jaguar XF for review.

Jaguar Cars as you may know has been plagued over the years with sub quality cars, troubled finances and uncertainty, but now its a British marque owned by the TATA corporation.

The Jaguar XF they delivered for review was a 3.0 Diesel Premium Luxury and when you get into it you know it, with sweeping leather over the dash and the door inlays and a true feel of luxury, the build quality instantly feels great and lasting, but unlike some German makes, not rigid and hard. The dash is also a mix of high tech gadgetry and classic Jaguar design. 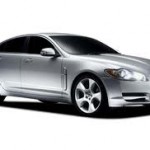 In true “male” style the delivery agent offered to show us around the controls but the answer was no. When you take delivery get the driver to show you around your new Jaguar, as the Satellite Navigation, Climate Control, Bluetooth etc are controlled by a single silver button, like a joystick and it takes you through various levels of controls on the screen which is situated in the centre of the dash. Initially daunting but you soon get used to it, and you can personalise the whole thing very impressively.

Plenty of seating space for the driver and front passenger as you would expect, but not that much at the back. The Jaguar XF boot is of significant size, but as with most saloons, the boot stretches under the rear windscreen so has impressive depth.

The drive of this 2011 Jaguar XF diesel around town is effortless, you almost want to go to sleep in it. The gear change is seamless, and the car is so quiet other than listening to the upgraded sound system. When increasing speed at busy roundabouts if you push the accelerator too hard the car lurches forward and rockets you forward but you never feel the car is not glued to the road – I would suspect a few more weeks of driving the Jaguar XF you would get the balance right – just to say at this point, if you have size 13 feet the accelerator and brake pedals are very close, which is a shame, but its not like some of the Ferrari’s when you have to drive on tiptoes if you have big feet!

On the dual carriageway and motorway the car is progressive and the engine just wants to keep going and going, naturally it has cruise control which you will need to use if you want to keep your driving licence as creeping up in speed would be very easy in this Jaguar XF. It is the first car I have driven which has a blind spot warning system – it is simply great – in your side mirrors when a vehicle is in your blind spot a clear warning light comes on in the side mirrors.

This Jaguar 2011 model year is being replaced with the 2012 model year, well if they have improved on it then it will be an incredible car – we will come back to you once we have driven it, however there are a few new Jaguar XF 2011 model year cars still available on finance and lease or of course cash purchase, and they will represent great value – don’t expect the 2012 model to come out at similar prices – we might be in a recession but it will be a sell out.

New Jaguar is making its marque, watch out you German makes as this kid is here to impress, if you would like to know more about this Jaguar Review call us – everyone within the OSV sales team has driven the car and will be able to answer your questions.

A Used Jaguar XF say 3 years old with 55000 miles will cost about £20000 with residual values holding well, another first for the Jaguar, and reassuring for owners. We have many Used Jaguar XF for sale so contact OSV to find out more.

The Jaguar XF 2012 will be available in the following models

The finest materials and exquisite craftsmanship.

The Diesel S represents the pinnacle of the Jaguar diesel range