Is Honda reliable? An impartial look at the Japanese car manufacturer

We investigate how reliable the popular brand is...

Honda cars are a common sight on our roads, as well as several other roads across the globe. Their cars are a favourite among many and are synonymous with being trustworthy, well-built and great to drive.

But are Honda reliable?

In this article, we look at just how reliable Honda are, and how this compares to some of its main rivals.

Yes, is the short answer. Yes, very reliable, is the slightly longer answer.

Honda have been pretty consistent when it comes to dependability and have always been in the top ten for reliability.

In 2015, a survey by WarrantyDirect and WhatCar? put Honda top for the ninth year in a row for overall reliability. Honda received a reliability index of just 41, which is way below the industry average (the lower the rating, the better the score).

ReliabilityIndex also rank Honda highly, coming in 2nd place only to Daihatsu. Honda were given a reliability index of 42.

Honda were also named the most reliable used car brand by WhatCar? And WarrantyDirect.

How reliable is the Honda Civic?

If we look at one of their most well-known cars, the Honda Civic, WhatCar? have placed the Civic as above class average for many repairs. These include electrics, air-conditioning and bulbs. However, they have put them at below class-average for wiper-blades, brakes pads and discs. Though they do tend to be only a few thousand miles below class average, this is still something that should be noted.

Is the Honda CR-V reliable?

ReliabilityIndex put the Honda CR-V at very reliable, with a reliability score of 59 which is below the industry average. They have reported that most of the problems come with the electrics, but that accounts for 25.37% of the problems, followed by the suspension.

The Honda Jazz scores very impressively, with a reliability index of just 12. Only a few issues were reported and that was mainly due to the suspension, followed by the electrics. But there were no issues reported with the fuel system, gearbox or cooling system.

Is the Honda Accord reliable?

The Honda Accord also does very well, with a reliability index of 29 and spend an average of just 1.7 hours off the road in the event of a repair. Their main issues tend to be with the electrics and the braking system.

Overall, I think it’s safe to say that Honda are one of the most reliable car brands out there. They have consistently topped reliability surveys and their cars seem to be consistently reliable also.

Why are Honda reliable?

So why are Honda one of the most reliable brands out there?

There are quite a few reasons why Honda are so dependable. One of these reasons could be due to the fact that they don’t cost much to repair when they do go wrong. Honda cars are cheap to repair and aren’t off the road for very long. This greatly increases reliability. One of the issues that many luxury brands run into is that their parts are expensive to source, replace and can be off the road for a long period of time, which lowers their dependability. However, a brand like Honda does not have this issue, and therefore has an increased reliability.

“Honda’s success in the reliability index is chiefly down to low failure rates. However, when things do go wrong, the cars are also relatively cheap to fix.”

Another reason Honda might be so reliable is due to their technology, or lack of it. Some more luxury car brands have packed their cars full of new, modern technology. While this might be great for the owner at first, this modern technology can go wrong and when it does, can be expensive to fix.

However, Honda cars don’t necessarily have so much modern technology. This isn’t a bad thing by any means, Honda know their audience and they know it well. But it does mean they are at a distinct advantage because the less technology there is in the car, the less there is to go wrong with it.

So those are a few reasons why Honda are so reliable.

What are the common Honda problems?

When you are looking at getting a car, either brand new or used, it’s important to know what problems you may run into later down the line. Here are some of the problems you may encounter when your Honda model is a bit older;

Those are some of the things you may want to look out for. If you are a buying a second hand Honda, then we recommend asking about these problems before you buy.

How reliable are consumer reports and surveys?

While we’re here, we might as well defend our use of consumer reports and surveys as a way of determining reliability.

Consumer reports and surveys from companies such as WarrantyDirect are a really accurate way of telling how reliable a car is. These surveys are carried out by the owners of the makes and models, who will be able to tell how dependable their car has been, and what problems they have had with the car.

Surveys done by the likes of WarrantyDirect are also a good way of determining how reliable a car is due to the fact they can access a large amount of data on what claims have been made on which cars and brands. Every time a customer makes a claim, they can record this information. They then use this information to determine which brands are the most dependable and which ones aren’t.

So, they are pretty reliable.

That said, they do have their faults. For example, it is hard to judge llong-termreliability for brand new models because they haven’t been around long enough. However, a good way to estimate this is to have a look at other models and see how well they have fared.

Overall, though, consumer reports and surveys are a very accurate way of determining the longevity of a car.

Honda vs. Toyota vs. Mazda; Which is more reliable?

It’s in this part of the article that we compare Honda to some of its rivals and see how reliable the brand is when compared to the other two. In this instance, we’re putting Honda up against Toyota and Mazda. So, how did they do?

Pretty well, but we’re sure you already predicted that. Although, Toyota and Mazda put up a good fight. Toyota came second in the Telegraph survey for most reliable used car brands, with Mazda coming in joint sixth.

In the engine failure survey, Toyota came second again, with a failure rate of 1 in 171. While this is impressive, it didn’t quite meet Honda’s 1 in 344. Still, that’s only 0.58% for Toyota when it comes to engine failure rate, which is something to be proud of. Unfortunately for Mazda, in this instance they weren’t in the top 10. They weren’t in the bottom 10 either though, so that’s a bonus.

Reliability Index place Toyota fourth and Mazda fifth in their table, with a reliability index of 59 and 64 respectively.

If you are looking for a reliable car, then you won’t go wrong with a Honda. That said, both Toyota and Mazda are also very dependable brands, so it doesn’t really matter too much which brand you go for if you are comparing the three. All three of these brands have scored very highly for their reliability so you wouldn’t go wrong with either Honda, Toyota or Mazda.

Which are the most reliable Honda cars?

The following Honda models are the most reliable;

These have all scored extremely well on ReliabilityIndex and J.D Power.

Which are the least reliable Honda cars?

And what about the least reliable?

In conclusion, Honda are extremely reliable. In fact, they are one of the most dependable car brands on the market today. If you are looking for a car that prioritises longevity then you cannot go wrong with a Honda. Even their most unreliable cars are pretty reliable. If you compare them to their rivals, Toyota and Mazda, then they knock them out of the park, though you wouldn’t go wrong with either of those models. One of the reasons Honda are so reliable is due to their low repair costs and the fact that they aren’t off the road too long. Ultimately, if you want a reliable car, then you should definitely look at a Honda. 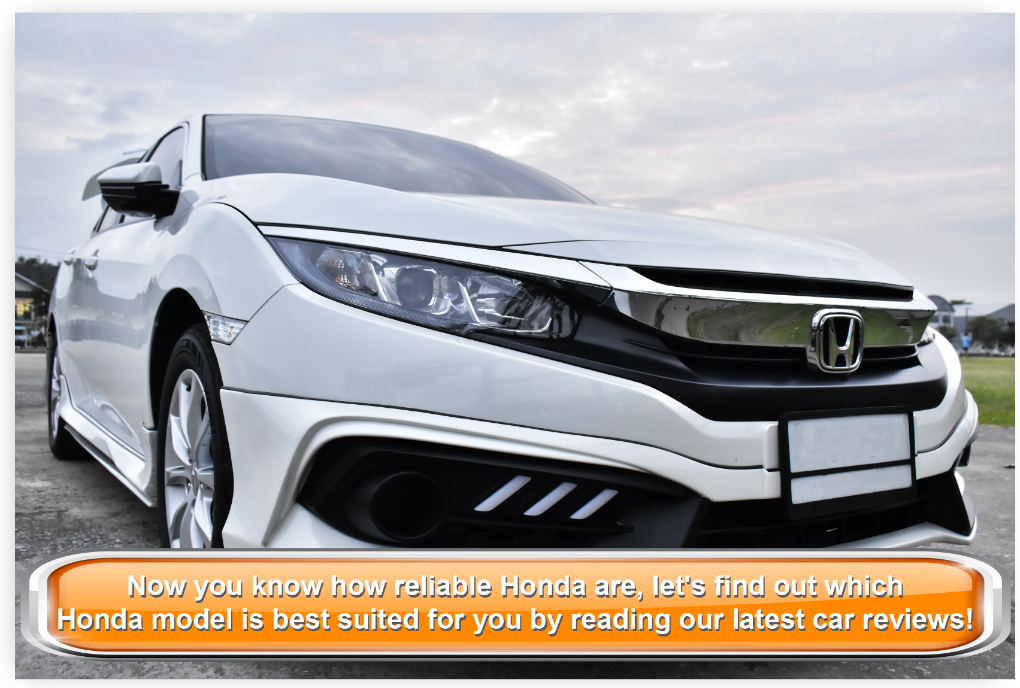