A brief history of Mitsubishi Motors

We look at the interesting history of the brand...

The Mitsubishi Group is a multinational company and are involved in everything from real estate to food and beverages to telecommunications and of course, automobiles.

And of course, it’s the automotive side of Mitsubishi that we are interested in.

Mitsubishi Motors was, as of 2011, the sixth biggest Japanese automaker and the sixteenth biggest automaker worldwide by production.

So where did it all begin?

In this article, we look at the history of Mitsubishi Motors, from its conception to the Renault-Nissan-Mitsubishi Alliance.

When did Mitsubishi start making cars?

Mitsubishi was founded in 1870 as a shipping firm. However, they did not start making vehicles until 1917 when Mitsubishi Shipbuilding Co. Ltd. produced the Mitsubishi Model A.

This was Japan’s first series-production automobile and was a hand-built, seven-seater sedan. It was based on the Fiat Tipo 3, however, it was considered too expensive compared to its European and North American counterparts, of which were mass-produced. Therefore, it was discontinued in 1921 and they only built 22 of these models.

In 1934 Mitsubishi Shipbuilding and Mitsubishi Aircraft Co. merged to create Mitsubishi Heavy Industries. While it concentrated mainly on manufacturing aircraft, ships and machinery, they developed the PX33. This was a prototype sedan for military use. The PX33 was the first Japanese – built passenger car with full-time four-wheel drive.

What happened to Mitsubishi after World War Two?

During the Second World War, Mitsubishi manufactured military aircraft and the Mitsubishi A6M was a primary Japanese naval fighter.

Following the end of the war, Mitsubishi went back to making vehicles. A three-wheeled cargo vehicle called the Mizushima and a scooter, the Silver Pigeon, were developed. However, family-controlled conglomerates, such as Mitsubishi, were ordered to be broken up by the Allied powers in 1950. Mitsubishi Heavy Industries was split into three regional companies, East, West and Central Japan Heavy-Industries. Each of these developed automobiles.

East Japan Heavy-Industries started importing an inexpensive American sedan in knockdown kit and sold this for the duration of the production run. Central Japan-Heavy Industries had a similar contract with Willys for knockdown kit-assembled Jeep CJ-3Bs. Licenced Mitsubishi Jeeps continued to stay in production until 1998, thirty years after the model itself had been replaced by Willys.

When was the Mitsubishi 500 launched?

The Mitsubishi 500 was a mass market sedan in 1953. The 500 was designed to meet new demand from customers. At this time, Japan’s economy was on the rise, wages were increasing and the idea of a family vehicle was becoming more popular.

The Minica kei car followed in 1962 which is the oldest Mitsubishi car to be in production when it was replaced in 2011.

In 1964, Mitsubishi launched the Mitsubishi Debonair. This was a luxury car primarily for the Japanese market and was their flagship passenger vehicle on the domestic market. It was introduced at the 10th All Japan Motor Show, later the Tokyo Motor Show, in October 1963. It was used by senior Mitsubishi executives as a company car.

When did Mitsubishi launch the Colt line?

The Mitsubishi Colt line of vehicles was launched in 1962 and continued until 2012.

It was first a series of kei and subcompact cars in the 1960s. It started with the Mitsubishi Colt 600. This was the first of a line of small family cars, set to complement their Mitsubishi 500.

Mitsubishi reintroduced the Colt nameplate in 1978 as a front-wheel drive hatchback, later followed by a sedan in 1982. This was marketed as the Mirage in Japan, the Colt name was only used in Europe and Australia. There were multiple Mirage-based Colts that were sold during the years 1978-2002. Some of these derivatives were sold as the Mitsubishi Lancer in many markets.

A network of Colt distribution deals had been established across Europe by 1977 and Mitsubishi sought to begin selling vehicles directly. However, cracks were starting to show in the Chrysler and Mitsubishi relationship. Chrysler were seeing their overseas market being encroached by Mitsubishi and Mitsubishi felt that Chrysler were demanding too much of a say in their corporate decisions.

By 1980, Chrysler were fighting bankruptcy and had to sell its Australian division to Mitsubishi. They then renamed it Mitsubishi Motors Australia Ltd.

The Mitsubishi brand was introduced to the American market with the Tredia sedan and the Cordia and Starion Coupes. However, their quota was restricted by an agreement between the Japanese and US Governments. However, by the end of the 1980s Mitsubishi were keen to increase their presence in the US and aired its first television advertising campaign.

Despite tensions, Chrysler and Mitsubishi agreed to unite for a manufacturing operation in Illinois. The 50/50 venture provided a way to get around the voluntary import restrictions but also providing a new line of compact and subcompact cars.

The result of this was Diamond Star Motors, and it was incorporated in October 1985. The name came from the two logos, Mitsubishi’s three diamonds and Chrysler’s pentastar. In 1987, the company were selling 67,000 cars a year in the United States.

Chrysler sold their stake in Diamond Star Motors in 1991 to Mitsubishi and only shared components and manufacturing on a contractual basis. They also decreased their interest in Mitsubishi Motors to less than 3% and announced their plans to divest all remaining shares in 1993.

The Mitsubishi Pajero was becoming hugely popular in Japan through the 1990s and Mitsubishi were seeing huge success with the Diamante and the Pajero.

It was rumoured in the years of 1992 and 1993 that Mitsubishi were planning a hostile takeover of Honda. Honda had been caught off guard with the rise of the SUV market and had lost focus after the illness and death of their founder. However, Honda weren’t going to let a hostile takeover happen and took drastic steps to ensure that this did not happen.

During the 1990s, Mitsubishi saw their domestic share rise to 11.6%. This was mainly down to the increase in the SUV market in Japan, which many Japanese car manufacturers dismissed and didn’t think would take off in their own country.

When did Mitsubishi partner with Volvo?

Mitsubishi and Volvo undertook a joint partnership with Volvo in 1991. The project was branded NedCar and began producing the Mitsubishi Carisma alongside the Volvo S40/V40.

Production of the Mitsubishi Outlander for the European market was also produced in the Netherlands.

When Volvo sold their Volvo Cars division to Ford in 1999, the Volvo Group bought a 5% stake in Mitsubishi Motors in November of the same year. They later sold their stake to DaimlerChrysler in March 2001.

Mitsubishi and Groupe PSA have been allied since 1999 after they agreed to co-operate on the development of diesel engines using Mitsubishi’s gasoline direct injection technology.

They also developed the Peugeot 4007 and the Citroen C-Crosser SUV based on the Mitsubishi Outlander.

When was the vehicle defect cover up?

Mitsubishi have twice admitted to covering up defect problems in its vehicles. What is often called “one of the largest corporate scandals in Japanese history”, four defects were publicised firstly in 2000 but confessed, in 2004, to 26 more defects going back as far as 1977.

These defects included failing brakes, malfunctioning clutches and fuel leaks. Mitsubishi had to recall 163,707 cars and also recalled Fuso trucks and buses, bringing the total of recalled vehicles to almost one million.

The president of Mitsubishi, Kawasoe, was arrested and 23 other employees implicated. Three of them have since been acquitted.

When was the fuel mileage scandal?

In 2016, Nissan, a partner of Mitsubishi, found discrepancies between information provided by Mitsubishi and actual fuel consumption. This was discovered while working on new micro cars for both companies.

Mitsubishi admitted to using inaccurate test methods and giving the wrong information on fuel consumption from 2002 onwards. The fuel economy test methods they used did not comply with Japanese regulations, and it was discovered that this was the case for the past 25 years.

However, Mitsubishi management said they did not know about the issue and that the wrong information came from the micro car department. An investigation by an independent company followed and the resulting scandal led to Nissan acquiring a controlling interest in MMC in 2016.

Nissan agreed to invest $237.4 billion yen in exchange for a 34% ownership stake in Mitsubishi Motors. In May 2016, Mitsubishi Motors announced Tetsuro Aikawa was to resign as president of the company. Both Aikawa and Mitsubishi Motors denied any involvement from top management in the mileage scandal. They said that much of the mileage-testing work was assigned to a subsidiary and there was lack of scrutiny.

This partnership started in 1999 when Renault bought 36.8% of Nissan’s outstanding stock and Nissan vowing to buy into Renault when it was able to. Fast forward to 2017 and the Alliance, Renault, Nissan and Mitsubishi, are collaborating on common platforms, electric and autonomous technologies and powertrains.

Mitsubishi and the present day

Mitsubishi, despite the scandals, are going from strength to strength. The rise in popularity of pickups and SUVs in the UK mean that Mitsubishi are now a common sight on British roads.

In the wake of the newly formed Renault-Nissan-Mitsubishi Alliance, Mitsubishi have undergone a brand relaunch, of which was launched at the Tokyo Motor Show in 2017. 2017 marks 100 years of the brand and they plan to launch 11 models by 2020.

The Mitsubishi Eclipse Cross is set to be launched for 2018 and fits between the Outlander SUV and the smaller ASX.

That really brings us to the present day. Mitsubishi are still making great cars that appeal to families and businesses alike, and their new Alliance will be sure to boost Mitsubishi and their upcoming models. 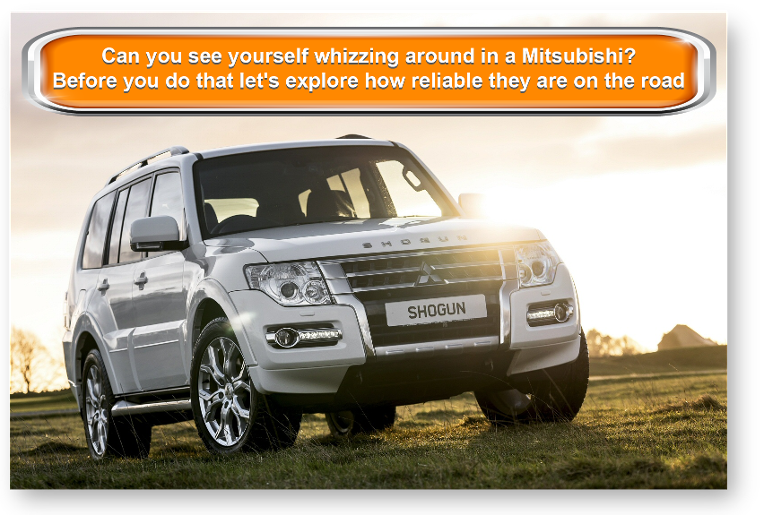