A brief history of DS

We look at the short but interesting history of the DS brand...

DS haven’t been around for that long, and in the grand scheme of the automobile industry, they were basically born yesterday.

Interestingly, though, there are two DS brands, one is the premium brand of Groupe PSA and the other is the historical Citroen DS. Though the two aren’t the same, they are linked.

So how did Citroen DS become DS?

In this article, we look at the history of DS, from the historical brand to the present day.

What is the difference between Citroen DS and DS?

As we said, there are two different branches of DS, one is considered the historical version and the other is the DS we know today.

Citroen DS was active between the years of 1955 and 1975. The DS 19 was introduced in October 1955 after 18 years of secret development. It was the successor to the Citroen Traction Avant.

In the first 15 minutes of the show, 743 orders were taken of the vehicle, orders for the first day totalled 12,000. The car was a front-engine, front-wheel-drive executive model, that later came in sedan, estate and convertible models.

Citroen sold 1,455,746 models and the DS placed third in the 1999 Car of the Century poll. It was also named the most beautiful car of all time by Classic Sports & Car magazine.

DS as we know it today is the premium brand of the Groupe PSA. PSA consists of Peugeot and Citroen, but it also sells Opel and Vauxhall.

The idea for DS came about after Groupe PSA wanted a premium brand to add to its belt. While they had tried differentiating brands by price level, similar to Volkswagen and Audi, they hadn’t gained the strength to earn Premium pricing.

After seeing the success of Lexus and Infiniti, which were Premium brands whose parent company were an affordable brand, they created DS.

Of course, the two are linked, they wanted to build on the heritage and the iconic status Citroen DS had, so that’s why they chose DS.

When did DS start making cars?

The first DS car was the Citroen DS3 and was launched in early 2010. It was based on the Citroen DS Inside concept car. The vehicle was customisable, and you can choose from a variety of colours that can then be contrasted with the body panels.

The Citroen DS3 saw huge success, it was named 2010 Car of the Year by Top Gear Magazine. It also came first in the supermini category in the J.D Power Satisfaction Survey UK, four years in a row. In 2013, it was the most sold premium subcompact car.

When was the Citroen DS4 launched?

It’s a compact car but is bigger than the DS3. The vehicle features raised suspension, resembling a compact SUV but has a coupe silhouette. At the time of the launch, all petrol engines in the DS4 came about from a collaboration between Groupe PSA and BMW. They initially offered two diesel engines, one of which is also found in the Citroen C5 sedan.

The current engine line-up, however, is slightly different. The vehicle also comes with Start&Stop technology, with the battery withstanding up to 600,000 starting cycles.

Like the DS3, the DS4 received high praise. It was named the Most Beautiful Car of the Year at the International Automobile Festival. It beat BMW’s F10 5 Series and the Honda CR-Z hybrid. It also received 1st Prize for Design in the Design Award contest by German magazine Auto Bild.

When was the Citroen DS5 launched?

The Citroen DS5 launched in November 2011. It was relaunched as the DS5 in 2015 after Citroen rebadged the DS models.

It was revealed at the Shanghai Auto Show in 2011 and was the first Citroen branded car to be assembled in Sochaux, where Peugeot’s lead European plant is based.

The model is a mixture of a hatchback and an estate in terms of styling, and is based on the same platform as the 3008. The cabin itself is designed to resemble a cockpit, and to enforce this relation to a jet, Citroen recreated an old photoshoot of the car with Concorde.

A hybrid convertible version of the DS5 was chosen by Francois Hollande for his investiture parade while he was President of France in 2012.

When was the DS6 launched?

The DS6 is a compact SUV and was designed for the Asian market specifically. Manufactured in China, it was the second vehicle to be launched solely under the DS brand, and to not feature the Citroen logo. It was announced in April 2014 and was launched in the autumn of the same year.

When did DS produce the DS7?

The DS7 Crossback is DS’s SUV. It was first presented in February 2017 and saw its launch to the public at the Geneva Motor Show in March 2017.

It’s based on the EMP2 platform, like the Peugeot 5008 and the Citroen C5 Aircross. While this is not the first SUV venture for DS, as the DS6 is a compact, it is the first for Europe.

This model is thought to be focusing more on comfort, quality and technology, including the likes of driving aids. This is in order to compete more with premium manufacturers such as Audi and BMW. It is also thought that the Groupe PSA are going to launch the vehicle in North America, the first of its DS models to do so.

Emmanual Macron, the President of France, chose the DS7 Crossback as his presidential car during his inauguration. This is the first time a president has used an SUV model as part of the inauguration ceremony.

This was of course lent to Macron before the model is sold in France, and is an ink blue colour. It also has an uncovered roof and multiple identity details including French flags and logos. The logos include RF, for the French Republic. It was only used the once for this occasion and has since been exhibited in the showroom DS World Paris.

The DS7 Crossback Presidential participated in the contest of elegance of the Chantilly Arts & Elegance Richard Mille in September 2017. It was accompanied by a mannequin dressed by Eymeric Francois.

When did DS become its own brand?

Up until 2015, DS was part of Citroen. It was after 2015 that the Citroen branding was dropped and DS has become a brand in its own right.

The only exception to this rule is in China, where DS has been a standalone brand since 2012. In China, DS have been sold in separate dealerships since 2014. They are produced by the Changan PSA, which was a joint venture based in Shenzhen.

This brings us to the present day. DS are going from strength to strength, and are showing no signs of slowing down. Now a brand in their own right, DS are looking to expand their market and focus more on premium features such as new technology and better interior. Though they haven’t quite hit the same popularity here in the UK, in mainland Europe they are hugely popular, and we predict it won’t be long before they are hugely popular here in the UK too. 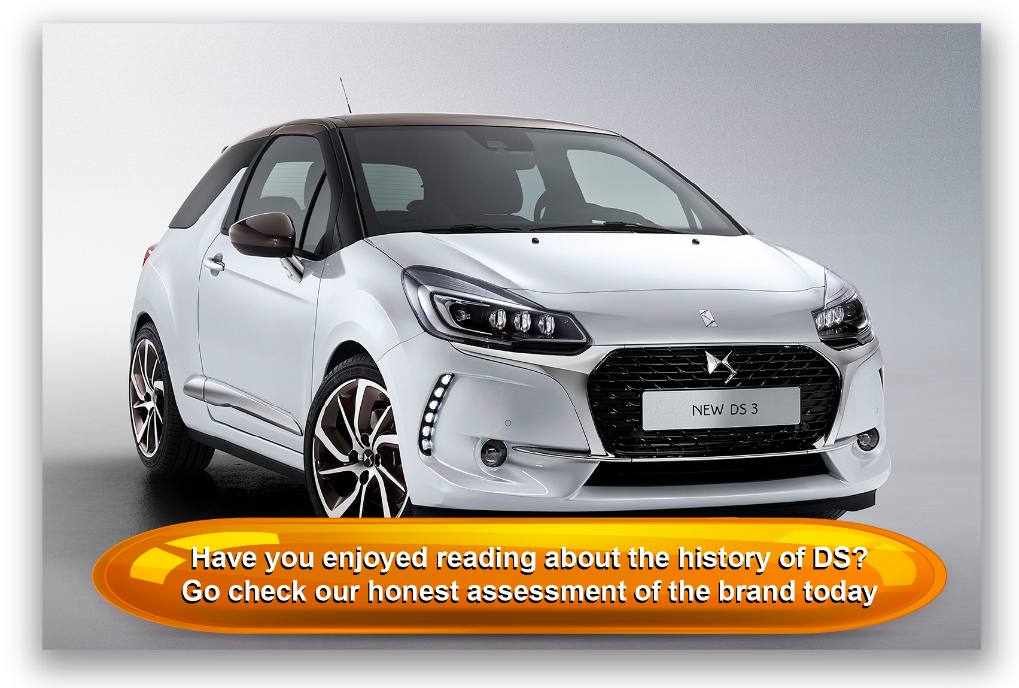