A brief history of Lotus

We look at the history of the classic brand...

Lotus are a classic British company, and one that have been around for over half a century. Originally manufacturing sports and racing cars, Lotus have a cult following and some very loyal drivers.

But how did they gain such a cult status?

We look at the interesting history of Lotus.

When did Lotus start making cars?

Lotus Engineering Ltd. was founded in 1952 by engineers Colin Chapman and Colin Dare. Both were graduates of University College London.

Lotus initially sold cars aimed at private racers and trialists. The cars could be bought as kits to save on purchase tax, and this ran until the early 1970s. The Lotus Elan Plus Two was the first Lotus road car not to be offered in kit form. The Lotus Eclat and the Lotus Elite were offered only as factory built versions.

The Lotus Elite was launched in 1950s, with the Lotus Elan following. This was a two seater that was then developed to a two plus two form. It was with the Elan that Lotus found critical and sales success in the 1960s. Lotus vehicles were notable for their fibreglass bodies and backbone chassis. Ford provided Lotus with their twin cam engines later down the line, and they also worked with Lotus on their Lotus Cortina. This was a very successful sports saloon.

When was the Lotus Europa launched?

The Lotus Europa was launched in the late 1960s and 1970s and was a two-seater vehicle. It was intended for the European market and had a mid mounted Renault engine. It was later upgraded to the Lotus-Ford twin cam unit.

The Lotus Seven first originated in the 1950s but continued to be produced into the 1970s. Lotus sold the rights to the Seven to Caterham, who have continued to produce the Seven since.

The Lotus Elite and the Eclat

The Elite and the Eclat models were four-seater vehicles aimed at well-off buyers. It featured optional air-conditioning and automatic transmissions. The Lotus Esprit followed, and is one of the most iconic Lotus models.

Lotus developed their own engines including a four-cylinder DOHC engines in the Lotus 900 series and a V8 engine that appeared in the Esprit.

When did Lotus enter an agreement with Toyota?

In 1980, Lotus were in huge financial trouble. Production dropped from 1,200 units a year to 383. This is for many reasons including global recession which led to sales in the United States to drop and limited development in their range of models.

In 1982, Chapman came to an agreement with Toyota. This was to exchange intellectual property and applied expertise, resulting in the development of the Mk2 Toyota Supra. It also produced the Lotus Excel which replaced the Lotus Eclat. Because the Excel used parts and drivetrain from Toyota, they were able to sell the vehicle for less than the Eclat.

Around this time, Lotus were looking to re-enter the North American market. Joe Bianco, a law professor and banking consultant, approached Lotus and proposed a new and separate company for Lotus in the United States. Lotus Performance Cars Inc. was created and produced fresh capital to Group Lotus back in the United Kingdom. The former General Manager of Ferrari North America was brought in to run the company and to start selling the Turbo Esprit. This was a huge success.

The Saviour of Lotus

Chapman died in 1982 of a heart attack at the age of 54. The following year, Lotus were near bankruptcy.

David Wickins agreed to become the new company chairman. Wickins was the head of British Car Auctions and took a 29% stake in Group Lotus. He also brought in new investors including Sir Anthony Bamford of JCB.

Wickins saw a complete overhaul of Lotus which resulted in him being called “The saviour of Lotus”.

When was Lotus bought by General Motors?

Despite Wickins turning Lotus around, the investor’s recognised that there was not enough capital to invest in new model development. So, they sought to find a major buyer.

General Motors sold the company to A.C.B.N Holdings S.A of Luxembourg in August 1993 for £30 million. A.C.B.N are controlled by Romano Artioli, who also owned Bugatti Automobili SpA. In 1996, a majority share in Lotus was sold to Proton. Proton are a Malaysian car company.

When did Geely Motors buy Lotus?

In 2017, Geely Motors bought a majority stake in Lotus. They now own 51% of the company with Malaysian group Etika owning the other 49%. In May of 2017 it was announced that Lotus was being bought by Zhejiang Geely Holding Group. They are also the owners of Volvo and London Taxi Company.

Lotus and Formula One

In the early days of Lotus they encouraged their customers to race their vehicles. It first entered Formula One in 1958, through its sister company Team Lotus.

Team Lotus won their first Grand Prix in 1960 in Monaco. The vehicle was a Lotus 18 and was driven by Stirling Moss. The Lotus 25 won in 1963 with Jim Clark driving and won Team Lotus its first F1 World Constructors Championship. Unfortunately, Jim Clark died crashing a Formula Two Lotus 48 in April 1968. His rear tyre failed in a turn in Hockenheim. This was a huge blow to the team and to Formula One as a whole.

Team Lotus had a huge impact on Formula One. They are credited with making the mid-engined layout popular for IndyCars and were one of the pioneers in adding wings and shaping the undersurface of the car to create downforce.

Ayrton Senna drove for Team Lotus from 1985 to 1987, winning twice in every year he raced for them.

Team Lotus stopped racing in 1994, when their cars were no longer competitive. In their run, Team Lotus won 79 Grand Prix races and beat Ferrari as the first Marque to achieve 50 Grand Prix victories. This was particularly notable considering Ferrari won their first title nine years earlier than Lotus.

Classic Team Lotus was established in 1992, and maintains Lotus F1 cars to run them in the FIA Historic Formula One Championship. They also preserve the Team Lotus archive and Works Collection of cars.

The Lotus name reentered the Formula One world in 2010 when a Malaysian team called Lotus Racing were awarded an entry. They used the name under licence from Group Lotus, and had nothing to do with the original Team Lotus. However, Lotus terminated the licence to Lotus Racing. Lotus Racing then announced that they had acquired Team Lotus Ventures Ltd with full ownership of the rights to the Team Lotus brand. They have been known as Team Lotus from 2011 onwards.

In 2010, Group Lotus announced the launch of Lotus Renault GP. This was the successor to the Renault F1 team. After a court dispute about the use of Team Lotus, Lotus Renault GP was rebranded as Lotus F1 Team. Team Lotus was renamed Caterham F1 Team.

What are the current Lotus models?

Lotus are still going strong, producing some of the hugely impressive cars that are a solid hit with customers and cult fans.

The Lotus Elise was originally launched in 1996 and the current range has some big innovations including aluminium extrusion frame and a composite body shell. There have been several racing variants of the Elise, including the 340R. The Elise, sold in the US, has a Toyota engine to ensure that it passes the strict emission laws.

The Lotus Exige S is currently the only Exige on sale and has a supercharged 3.5-litre V6 engine.

The Lotus Evora was launched in July 2008 after being developed under the codename Project eagle. The Lotus provided the Evora S Model as Rapid Response Vehicles to the Rome and Milan Carabinieri. This replaced the Lamborghini Gallardos. A more powerful Evora model, the Evora 400, was unveiled at the 2015 Geneva Motor Show. In September 2017, Lotus unveiled the Evora GT430.

And that brings us to the present day. Since Lotus have been bought by Geely there has been talk of expansion including rumours of producing an SUV. They are also talking about a new Elise for a 2020 launch, bringing the model into the 21st century in a big way. Whatever the outcome, we’re sure that Lotus will continue to have a huge following for many years to come. 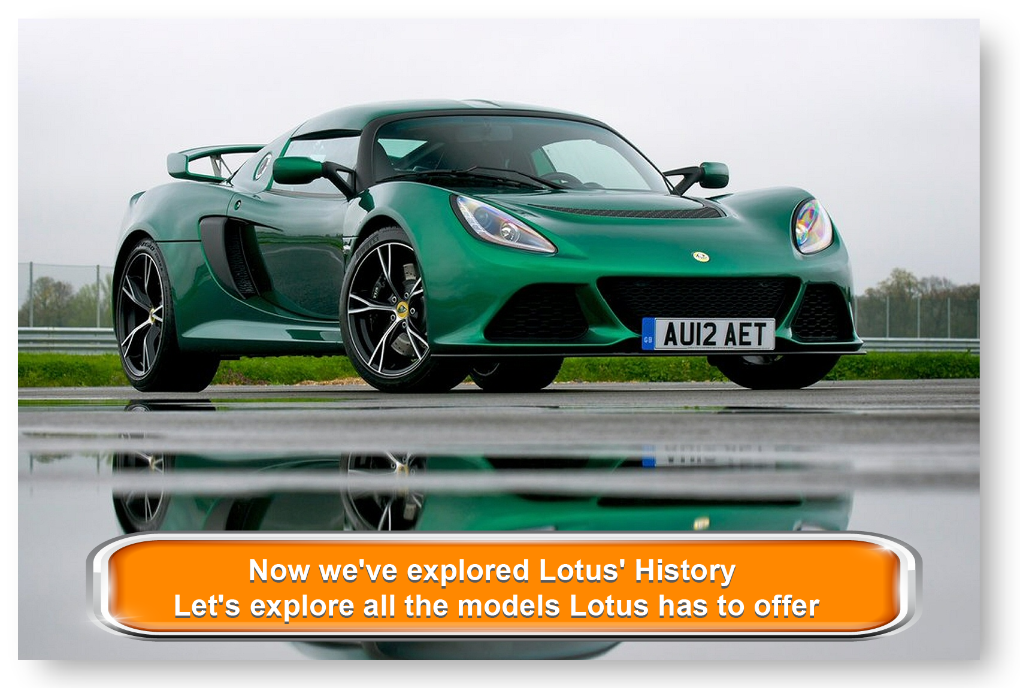