Home / Industry News / F1 on the streets of Milton Keynes

F1 on the streets of Milton Keynes 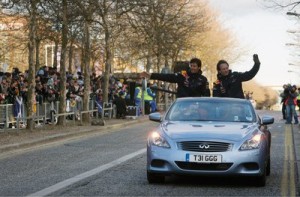 The streets of Milton Keynes turned into a Formula One track on Monday.

Roads in Milton Keynes were specially cordoned off for the event, allowing Red Bull Racing drivers Sebastian Vettel and Mark Webber to drive the World Championship-winning Red Bull F1 racers along the streets.

As well as getting an up-close look at the impressive F1 cars in action, fans also had the chance to meet and talk to Christian Horner, the Red Bull Racing Team Principal, and Adrian Newey, Chief Technical Officer.

Car enthusiasts got to see the world’s fastest accelerating hybrid, the Infiniti M35h, too, as it was chosen to transport the two drivers to the event.

Infiniti’s large stand at the event displayed a wide range of their top-end models, along with a chance to see the brand’s more unusual vehicles.

These included the Infiniti FX Sebastian Vettel Version concept, which was launched at the Frankfurt Motor Show in September.

The resulting FX concept is billed as Infiniti’s fastest and most exclusive road car.

Another rare car on show was the Infiniti FX30ds, branded in distinctive RB7 colours, which acted as the pace car for the F1 laps.

Celebrating a year of success

The first year of Red Bull Racing and Infiniti’s partnership has achieved some notable successes, with the team winning the Drivers’ and Constructors’ World Championships.

According to Wayne Bruce, of Infiniti Europe, the event marked a fitting end to a remarkable first season for the Japanese brand.

If you’re interested in buying or leasing a new vehicle contact our sales team. Alternatively, visit our website where you will find new and used Infiniti’s available for sale or on finance.