A brief history of Dacia

We look at the history of the Romanian brand...

Romania’s top company by revenue and the country’s largest exporter, Dacia has come a long way since its conception as a communist state-owned company.

Finding its niche in the low-cost sector, Dacia has been the butt of many a joke from the ex-Top Gear trio. But the Romanian car manufacturer are getting the last laugh as one of Europe’s fastest-growing car brands.

So how did the brand go from being the symbol of the Ceauşescu government to making around 2.9% of Romania’s GDP? OSV takes a look at the interesting history of Dacia

When did Dacia start making cars?

Founded in 1966, Dacia was founded under the name Uzina de Autoturisme Pitesti (UAP). The main factory was built in 1968 in Colibasi, now Mioveni.

Dacia acquired the basic design and tooling of the Renault 12. However, until the tooling was ready, the decision was made to produce the Renault 8 under licence. This was known as the Dacia 1100, and was the first Dacia produced. 37,546 models of the Dacia 1100 were produced. There was another version, the 1100S, but it was produced in limited numbers and was for the police and used in motor racing. This had twin headlamps and a more powerful engine.

The 1301 Lux Super was introduced in 1974 and came with features including a radio, a heated rear screen and windscreen mirrors on both sides. However, this model was reserved for the Communist Party Nomenklatura. The Dacia 2000, essentially the Renault 20, was also only reserved for the Party elite, and you could only get it in dark blue or black. Therefore, numbers of this model were very limited.

The 1310 was known as the Dacia Denem here in the United Kingdom, and it was considered the top of the range model. It boasted a five-speed gearbox, alloy wheels and electric windows. It was launched in 1981, under the name 1310 in Romania. The slogan for the car was “The Very Acceptable Dacia Denem” but unfortunately, it was not meant to be.

Sales were limited, and it is thought that there are less than 10 surviving to this day. The Romanian Embassy in South Kensington did keep a fleet of the Danem’s until the mid-1990’s. The pick-up version, known as the Shifter, continued to sell into the 1990s and the Aro 10 was sold as the Dacia Duster. However, the Danem itself was pulled in late 1982.

The Sport model was produced around the same time, and the two-door Dacia 1310 Sport, later the 1410 Sport, was available to the general public. However, they were extremely popular for rallies, and racing drivers saw huge success with them.

The 1980s was a time for reinvention, and towards the end of the century, a revolution. Cars such as the 500cc Mini-Dacia, the Dacia 1310 variants and the Dacia 1310 Limousine, which is still on the road today, were all produced at the start of the decade.

The Dacia 1304 Pick-Up and Drop-Side models experienced such commercial success that they remained in production (with modifications, obviously) until December 2006.

Many senior officials in the Communist Central Committee owned the 1320. This was a top-of-the-range model that had two large headlights, plusher interior and a new dashboard. It was the most expensive car in the Dacia range. They were also used as taxis. However, the 1320 did not last long and it wasn’t long before there were new prototypes using the 1320 front but a new rear and other modern features.

When did Renault buy Dacia?

Following the 1989 revolution, Dacia struggled to keep up with the foreign cars now entering the Romanian market.  After all, before the revolution Dacia’s were some of the only cars on Romanian roads.

Their factories and equipment was outdated, as were their designs. The Liberta (Liberty was in fashion straight after the Revolution, surprisingly) was launched in 1991 and continued production until 1996. But ultimately, Dacia were struggling to keep up with the designs and production of its foreign counterparts. The 1320 received a new front end, called the CN1, and there were attempts to rejuvenate the model range. These included introducing new commercial vehicles such as the 1307 double-cabbed pick-up, which sold very well on the Chinese market.

The Dacia Nova launched in 1994 to very little success, this was mainly due to the fact that its development work started in 1983, meaning that the design was outdated. There were also reports of reliability and rustproofing issues. The revamped Nova, in 1996, however saw vast improvements and was a common sight on Romanian roads.

Renault acquired Dacia in 1999. After failing to purchase Skoda in a joint venture with Volvo, Renault bought Dacia and injected €2.2 billion into the company to update its facilities and product line.

Their ambition was to create an entry-level car for developing markets. Their main focus was to keep costs to a minimum but also ensure that the end product was reliable. The result? The Dacia Logan.

When was the Dacia Logan launched?

The Dacia Logan was launched in 2004 and is the most successful Dacia since the 1300’s. It also became one of the top-selling cars in Central and Eastern Europe as well as Russia. The Logan is sold all over the world, sometimes under the Renault brand. The diesel version was launched a year later.

Dacia and Renault saw 40,000 Logan’s sold within the first year, with Romania representing 60% of the sales. Since it started exporting to Western Europe, they have seen a 10% increase in sales every year since.

The pickup-model and the Sandero, the Logan based hatchback, were launched in 2008. It was also around this time that Dacia went through some rebranding, including adopting a new logo and later revealed the facelifted Logan model.

When was the Dacia Duster launched?

The Dacia Duster is actually the number one selling car for Renault. Worldwide. The Mioveni plant, where the Duster’s are made, is the biggest vehicle plant for the French manufacturer in terms of output.

It was launched at the Geneva Motor Show and signalled Dacia’s intention to release an SUV model. It was the first crossover SUV built by Dacia since Renault acquired the company.

Dacia vs. the workers

The relationship between Dacia workers and Dacia has been quite fractious in recent years.

In 2008 workers demanded a 65% pay rise, arguing that they were being paid considerably less than their counterparts in France, where Renault workers are. In reply to the demand, managers had offered a pay rise of 19%, finally agreeing to an average 23% pay rise after workers staged a 14-day walkout.

In nine years wages for Dacia workers have increased threefold and they were, in 2014, being paid twice the national average.

However, in 2015, there were more reports of strike action after failed negotiations in regards to higher salaries and bonuses.

In 2012 Dacia launched the Lodgy, a new compact MPV that was manufactured in the new factory in Tangier, Morocco. Second generation Logan’s and Sandero’s were also launched that year with all new safety features, engine and other comfort equipment. The facelifted Duster was presented at the Frankfurt Motor Show in 2013, receiving modifications to the front and rear ends. A new interior on the Logan and Sandero models were also introduced. And in 2015 Dacia sold their 3.5 millionth car since the brands revival ten years prior.

And we’re at the present day. Dacia are crucial to Renault, and it’s surprising that there has been little competition with the brand since its success. Will it stay this way? Or will others see an opportunity in the low-cost sector? Only time will tell. 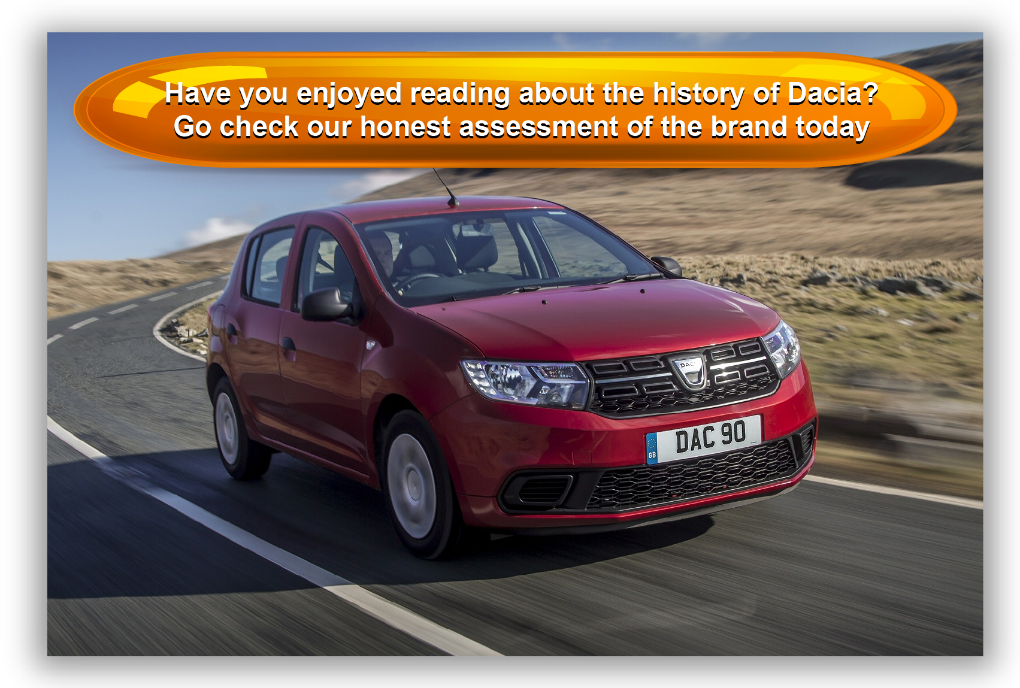