A brief history of Maserati

We look at the history of the iconic brand...

Maserati are one of the most well-known brands in the world, and one of the most luxurious. Synonymous with luxury and style, the Maserati tagline is “Luxury, sports and style cast in exclusive cars”, and they are exclusive.

Their emblem is a trident, particularly fitting for such a strong luxury sports manufacturer, and a homage to the company’s home city.

So where did it all begin? How did Maserati become the status symbol it is today?

We look at the interesting history of Maserati, from the Maserati brothers to FCA.

When was Maserati founded?

From the very start of the 20th century, the Maserati brothers were involved in automobiles. Alfieri, Bindo, Carlo, Ettore and Ernesto Maserati founded the Maserati brand in 1914.

Alfieri, Bindo and Ernesto originally built 2-litre Grand Prix cars for Diatto. Diatto then suspended the production of race cars, which led to the creation of Maserati and the Maserati marque.

The first Maserati was driven by Alfieri and won the Targa Florio 1926. They started making race cars with 4, 6, 8, and 16 cylinders. Alfieri Maserati died in 1932, but the brothers continued to build cars that won races.

When did the Orsi family buy Maserati?

The remaining Maserati brothers sold the brand to the Adolfo Orsi family in 1937. They relocated the company from Bologna to Modena, where it remains to this day. This doesn’t mean we say goodbye to the Maserati brothers, they still had engineering roles in the company.

They had wins throughout 1939 and 1940, the Maserati 8CTF won the Indianapolis 500, the first Italian marque to do so.

What happened to Maserati during World War Two?

Maserati had to abandon making vehicles to produce components for the Italian war effort. They also worked to construct a V16 town car for Mussolini before Ferry Porsche of Volkswagen built one for Hitler. However, this failed and plans were scrapped.

Once the war was over, Maserati resumed making cars, including the Maserati A6 series. Around this time, some key players joined Maserati including Alberto Massimino, an old Fiat engineer who oversaw design for all racing models for the next ten years. He also had experience at both Alfa Romeo and Ferrari.

When did Maserati withdraw from racing?

One of the reasons Maserati withdrew from racing was because of the Guidizzolo tragedy during the 1957 Mille Miglia.

During the Mille Miglia, Alfonso de Portago’s Ferrari veered off the road and hit multiple spectators. The driver, the co-pilot and nine bystanders were killed. Five of those killed were children.

Though Maserati did still build cars for private racers, they started to become more focused on building grand tourers.

In 1957, they launched the Maserati 3500 GT. It was the first ground-up grand tourer design and the first series produced car. The 3500GT provided underpinnings for the V8 powered 5000 GT, another hugely popular car for Maserati.

Over 2200 Maserati 3500 GT’s were created and were vital to keeping Maserati afloat when they withdrew from racing.

When was the Maserati Quattroporte launched?

The Maserati Quattroporte was launched in 1963 and was Maserati’s first saloon car. The name literally translates to “four door”.

The design for the Quattroporte came from the Maserati 5000 GT. The model was introduced in November 1963 at the Turin Motor Show, with regular production starting in 1964. The model was also marketed to the United States. However, regulations mandated that there were to be twin round headlamps in place of the single rectangular ones found on the European Models.

The second generation was launched in 1974 after making its debut at the Paris Motor Show. It was considerably different than the first Quattroporte and was built on an extended Citroen SM chassis. However, the oil crisis of 1973 and the collapse of the Citroen/Maserati relationship (more on that in a bit) meant that Maserati were unable to gain EEC approval for the car.

Therefore, most of these vehicles were sold in the Middle East and Spain.

The current Quattroporte was introduced in 2013 and is larger than any of its predecessors. It has a twin-turbocharged V6 and V8 petrol engines as well as a turbodiesel. It was revealed at the North American International Auto Show in Detroit in January 2013 after production had started in November of 2012.

When did Citroen take over Maserati?

In 1968, Citroen took over Maserati with Adolfo Orsi remaining the nominal president.

It started as a joint venture, of which was made public in the January of 1968. Maserati would design and manufacture an engine for the Citroen SM, the upcoming Citroen flagship car. The SM was launched in 1970 and was a four-seater Coupe powered by a Maserati Tipo V6 engine.

New models were launched and built in larger numbers than before. Citroen borrowed Maserati’s engines for the SM and other vehicles, and Maserati incorporated Citroen technology in their vehicles, particularly the use of their hydraulics.

One of these new vehicles was the Maserati Indy in 1969. It was a Vignale-designed four seater GT and was produced in 1100 units. The Maserati Bora followed in 1971 and was the first series production mid-engined Maserati.

Maserati and the Oil Crisis

The 1973 oil crisis has been a challenge for all vehicle manufacturers, and has appeared in many of our car histories. And, Maserati were no different. Demand for sports cars, and fuel hungry ones at that, shrunk considerably and austerity measures in Italy meant that the domestic market was no better. Unfortunately for Maserati, over half of their sales were for the domestic market. The only vehicle they would sell in relatively large numbers was the Merak which had a small engine.

To make matters worse, Citroen went bankrupt in 1974 and began the incorporation of PSA Peugeot Citroen. In May 1975, Citroen management announced that Maserati had been put into liquidation. This announcement was sudden, and a consequence of this was a picket of the factory by the workforce. Trade unions, the mayor of Modena and various local politicians worked to save 800 jobs. The industry minister Carlo Donat-Cattin flew to Paris to meet the chairman of Citroen and after several meetings, Citroen agreed to suspend the liquidation at the request of the Italian government. In return, the government guaranteed six months of a special redundancy fund to pay the salaries of the workers.

It was also in these meetings that the name de Tomaso was mentioned.

When did de Tomaso become president of Maserati?

An agreement was signed in August 1975 at the Ministry of Industry in Rome. This meant that Maserati was passed from Citroen to Italian state-owned holding company GEPI and Alejandro de Tomaso. As of December 1979, GEPI owned 88.75% of Maserati and the remaining 11.25% was being controlled by de Tomaso.

New Maserati models were introduced at the beginning of 1976, sharing their underpinnings with de Tomaso cars. These include the Kyalami and the Frua which was powered by Maserati’s V8.

The 1980s saw Maserati abandoning the mid-engined sports cars and instead focusing on compact Coupes such as the Maserati Biturbo. This was a hugely successful model and sold 40,000 units. The range was extended in 1983 and 1984 to include Saloons and a Cabriolet.

Chrysler bought a 5% share in Maserati in 1984 and a joint venture was later signed. Maserati would produce a car for export to the American market, this would be the Chrysler TC. Chrysler increased its stake in Maserati to 15.6%.

When did Fiat buy Maserati?

Maserati and Nuova Innocenti was agreed in 1985. However, they were separated in 1989. The company that sold Innocenti cars continued its business under a 51% Fiat Auto ownership.

A few years later the Maserati Chubasco was developed, due to launch in 1992. However, the project was cancelled as it was considered too expensive.

The Maserati Ghibli was introduced in 1992, a six-cylinder Coupe. Between the years of 1992 and 1994, all models were discontinued apart from the Ghibli and the Shamal.

In May 1993, de Tomaso sold its 51% stake in Maserati to Fiat, who then became the sole owner. This was a new chapter in Maserati’s history. They launched the 3200 GT in 1998 and was a two-door Coupe powered by a 3.2 litre twin-turbocharged V8 engine.

When did Ferrari buy Maserati?

Fiat sold their share of Maserati to Ferrari, Maserati’s long time arch rival, in 1997. In 1999, Ferrari took full control of Maserati, making the marque its luxury division. A brand new factory was built and Ferrari are credited for bringing Maserati back from the brink of bankruptcy.

In 2002, Maserati re-entered the United States market, quickly becoming one of their largest markets. They also re-entered the racing arena with the Trofeo and the Maserati MC12.

When did Maserati partner with Alfa Romeo?

Maserati split off from Ferrari and partnered with Alfa Romeo in 2005, creating the Maserati and Alfa Romeo group, under the Fiat Group. The same year, the 20,000th Quattroporte left the factory. In 2007, Maserati made a profit for the first time in 17 years.

In 2010, Fiat announced a new partnership group for Alfa Romeo, Maserati and Abarth. The group was to be led by the CEO of Maserati, Harald J. Wester.

In May 2014, Maserati announced the production of the Levante SUV, and also announced that it would be the last year of production for the GranTurismo, although production was actually extended until 2018.

Maserati and the present day

Maserati have very recently announced that they are considering launching a smaller crossover to help reach their earning targets by 2020. The Levante already accounts for 40% of Maserati sales in the United States. The second SUV would share a platform with the Stelvio crossover from Alfa Romeo and would be set to compete in the luxury SUV market against the likes of the Porsche Cayenne.

And that’s the history of Maserati. Though Maserati has had its ups and downs, it is doing better than it has done in many decades, and appears to be going from strength to strength. We’re sure that Maserati will still be creating luxury cars that are synonymous with Italian style for a long time. 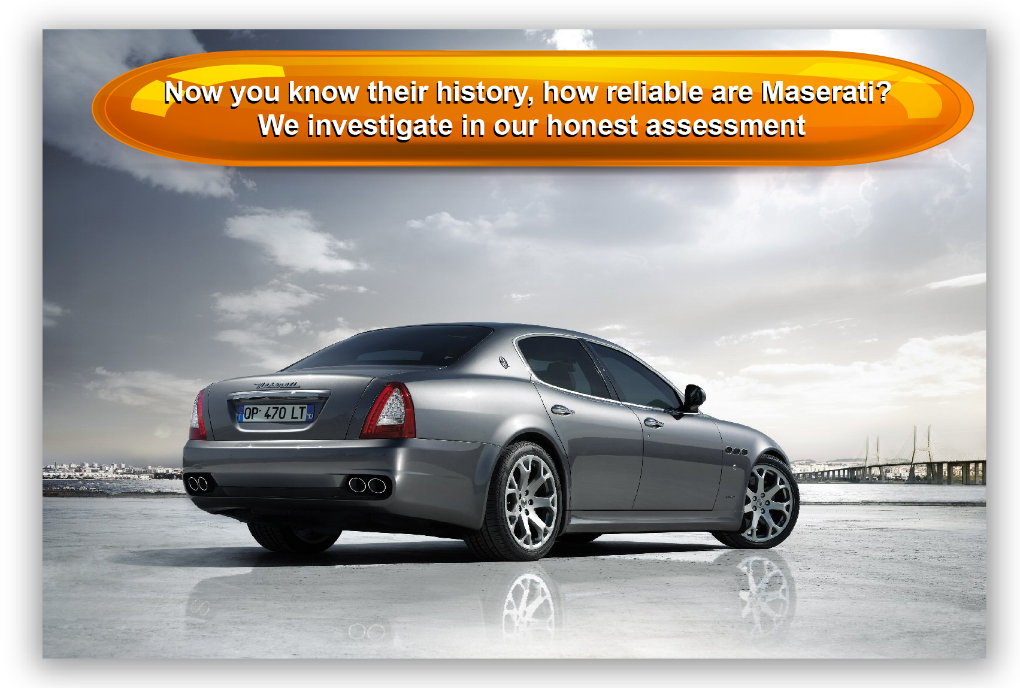