Why is car finance so cheap? What costs are covered in a finance agreement?

Why are car finance deals so cheap and what has caused the low prices...

Why is car finance so cheap?

In recent years we’ve seen a real influx in the volume of people wanting to purchase new cars. This is for a number of reasons. Firstly, the scrappage scheme of 2009 meant that an awful lot of people moved from their old banger to a brand new vehicle on a reduced finance deal. This set a president and those people who purchased a new vehicle back in 2009-2010 will have owned their car for 7 years now. It’s likely to be time for something new and these drivers are looking for ways to purchase another new car.

Car dealers offer a range of finance options to make buying a new car accessible. There may not be many people with upwards of £15,000 to spend on a brand new car, but there will be plenty who have £199 to spend per month. This is undoubtedly cheap. In most cases, people believe that getting car finance is cheaper than buying a vehicle outright (if you have the funds available). However, in many cases it is cheaper to get finance than not! Subject to you having a good credit file.

What are the finance deals available?

You are faced with a few options when it comes to financing a new car. So choosing the one most suited to your situation is a great starting point.Which is where an established independent broker will be best placed to guide you on what options you should consider. Most people purchase a new car on some form of hire purchase scheme. This means you don’t own the car until the end of your contract but pay a monthly fee to clear the balance. Another popular option is PCP. Imagine this like a part buy/part rent scheme whereby you are not committed to purchasing the car at the end of the contract. You can if you’d like to, or you can trade it back to the dealer to enter into a new agreement for a new car.

This article details more about the different types of car finance available.

How can the prices be so low? 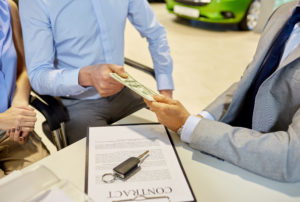 The low prices on a hire purchase contract are reserved for people with a good credit rating. They provide a low risk to the lender and as such, the lender is prepared to only make a small profit on the arrangement. PCP prices are so low because part of the cost of the vehicle is deferred to the end of the agreement, therefore reducing the monthly payment. You will then need to decide if you want to purchase the vehicle or not. The purchase is subject to you paying a final ‘balloon payment’ which will have been agreed at the start of the contract based upon the estimated future value of the car.

These low monthly prices and flexible options are undoubtedly appealing. Paul Harrison, head of motor finance at the FLA said in an interview with The Guardian

“Young people are used to mobile phone deals and iPads on a contract. People are used to renting now. In an era where everyone’s used to paying £50 a month for their Sky bill, consistency is the word. Dealers will throw in service and maintenance packages, warranties and insurance so you can get your total cost of motoring down to one payment each month. That consistency is something we all look for now.” 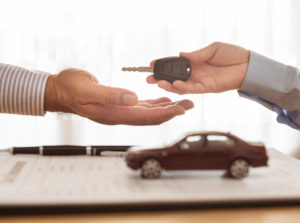 In some instances, yes. However, consideration must be given to the overall cost of driving and maintaining a car. Second-hand cars often require higher investment in maintenance and are not as economical to drive. With low-interest rates and flexible PCP arrangements people often find that a new car with a manufacturer’s warranty a much more cost effective means of driving.

Motoring journalist Quentin Willson has a strong advocate of second-hand cars for many years. In his interview with The Guardian, he said

“It’s this bizarre situation where it’s cheaper to buy yourself a new little city car with a three-year warranty than run an old VW Golf. A Skoda Citigo for £70 a month. What’s not to love?” For the modern motorist, a part-bought, part-rented PCP car you change every three-years is “guilt-free motoring” with none of the stress of buying or maintaining a secondhand car”.

An example of how second hand isn’t always cheaper

Motoring magazine Auto Express gave this example in their report

A,ha I hear you say! So second hand is cheaper?…….. well not quite.

After looking on the Mercedes website. Mr Roxburgh found the firm was offering finance on the new car for less than the used one. It was a PCP deal (Personal Contract Purchase) where buyers pay monthly for use of the vehicle. Then have the option at the end of paying a lump sum to buy the car or handing it back.

He calculated that after two years, the used car would have cost £1,242 more than the new version.

What are other reasons behind low car finance deals? 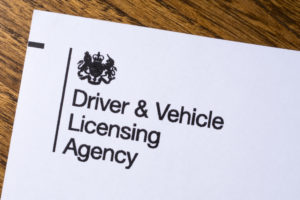 While Britains love of new cars is steadily increasing, the rest of Europe is still on the decline. This article from The BBC quoted The Society of Motor Manufacturers and Traders (SMMT), as saying that 2.69 million cars were registered last year, 2% higher than in 2015. The industry body said 2016’s growth was due to “very strong” consumer confidence, low-interest finance deals and the launch of several new models.

So the manufacturer’s in Europe are producing vehicles when there simply isn’t enough demand for them in Europe. There are significant costs to closing manufacturing units. So it makes better financial sense to sell the cars to the British market for a lower ticket price where demand is high.

Usually, rates on new car financing are better than for used cars. This is because there is more discount available on new models. Also, there is a marketing budget assigned to promote new cars. This can be used to subsidise the finance cost should the dealership need some room to wiggle on the price.