Safely sharing the road with cyclists

Safely sharing the road with cyclists

You may have noticed an influx in cyclists, especially if you live in the London area. Cycling is one of the most convenient and cheapest forms of transport. So it’s not surprising that more and more people are choosing to take up the hobby. Now that there are more and more people using the road on bikes, we thought it would be helpful to give you a guide to safely sharing the road with cyclists.

There’s been a long-lived rivalry among road users. The common and stereotypical idea is that pedestrians hate cyclists, cyclists hate car drivers and car drivers hate everyone! But we all want to live in harmonious unison really. So these steps will help you to remain a safe driver and make the road a safer place for cyclists.

In the mind of the cyclist 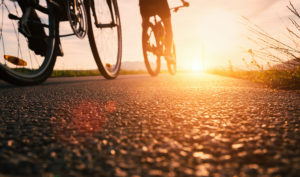 A staggering 1.5 million people cycle daily in the UK. A further 2.5 million cycle 2-5 days per week. That’s a lot of people trying to get to their place of work, education or around town. What’s really interesting is that 80% of cyclists also have a driving licence. So, they have a good knowledge of the rules of the road. If you’re looking to save your household some money you might choose to cycle to work instead of paying for public transport or fuel on your car.

Cyclists are far more vulnerable than car drivers. As a car driver, you have a large metal protective casing to protect you from an impact. A cyclist will at best have a crash helmet to protect them from head trauma should they be dismounted from their bike. This means that as drivers we should be increasingly considerate and cautious for cyclists using the road.

When driving there are a few precautions you can take to ensure you drive safely around cyclists. Much like other car drivers, it’s best to expect the unexpected and never assume. We cannot control the actions of others, but we can control our own actions. Being mindful of the fact that cyclists may be anywhere and their intentions on the road may not be clear will help. Rather than assume and risk an accident we recommend you check your mirrors and hang back if you’re unclear as to the cyclists next actions. 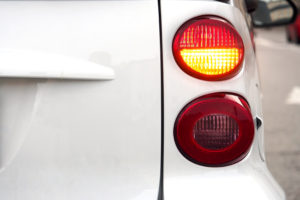 Cyclists should only pass you on the left-hand or (passenger side) of the car. But as we cannot guarantee the actions of others it’s best to check your mirrors and blind spots carefully when you turn right or left for cyclists. This is to prevent you from coming across the path of a cyclist moving their way along the side of your vehicle.

When turning left, allow the cyclist to pass the junction. Overtaking them and swerving sharply in front of them is hazardous.

If you are approaching a roundabout it’s worthwhile noting that before turning onto the roundabout you must give way to ANY road user on the right. This includes cyclists.

The Highway Code and cyclists

The Highway Code suggests that cyclists can be passed by car drivers giving one cars width distance as a minimum. It’s best to give as much room as possible in case the cyclist needs to swerve to avoid a drain or pothole in the road.

Once you’ve parked your car, the hazard doesn’t stop there. Be mindful to check your mirrors before opening your car doors. That would be a very painful accident for a passing cyclist to be confronted with a car door. 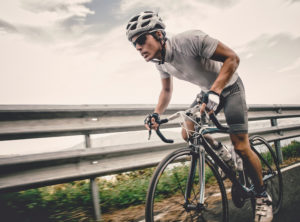 A cyclist may be travelling faster than you think. Some road bikes can reach speeds of 20mph or more on a flat surface. Be sure to judge their speed carefully before pulling out of a junction.

This is another reason why you shouldn’t park or pull over into cycle lanes. Even if a cyclist is seemingly a long way away, pulling in would force them to have to swerve around you into unassuming traffic. This could cause a dangerous situation. Also, driving or parking into a cycle lane is a traffic offence.

When should you wait

If at any point in your journey you are unsure about whether you have the time or space to overtake a cyclist safely you should always wait to do so. It’s better to be safe than sorry. If a cyclist is turning right across other traffic you should wait behind them as if they were another vehicle. Squeezing past them impatiently would be a hazard. They could decide to manoeuvre at the same time and it is easily misjudged.

At red traffic lights, you should wait behind the ‘advanced stop’ area designated for cyclists at red lights. When the lights turn green, allow the cyclist to pull away successfully with a safe distance ahead before following.

If the road is narrowing ahead don’t be in a rush to try to overtake. You could misjudge it and end up running the cyclist off the road if your overtaking matches the narrowing in the road.

Extra precautions in ‘other’ conditions

Driving at the correct speed for the conditions of the road is essential for safety in general. In the context of cyclists on the road, it ensures you are able to stop in plenty of time if needed.

On Country roads, you should be mindful that cyclists could be riding in groups. While cyclists are required to be in single file on the road, they will often overtake each other meaning you need to give additional room for them when you pass.

If you’re driving at night, the advice is to always use dipped headlights when approaching a cyclist, much like other road users, cyclists can also be blinded by full beams.

Allow cyclists extra room in wet weather as the surface of the road or any drains could be slippery causing them to fall.

What can cyclists do to keep themselves safe? 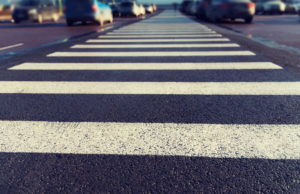 As a cyclist, there are a few precautions you should take to help keep yourself safe. Pay attention to your surroundings, driving on the road can be very dangerous if you’re not alert. Ride away from the gutter and in a straight line where possible. Ensure you pass parked cars with a doors width space to your side in case one flies open. Use appropriate hand signals to inform other road users of your intentions. Respect the rules of the road surrounding red lights and zebra crossings. There are strict laws against drivers using a mobile phone while driving, this should also apply to cyclists. Being distracted by a mobile while using the road at all should be a fineable offence. Make yourself visible with bright clothing and ALWAYS have lights and reflective clothing at night. Finally,  keep up to date with your knowledge of the Highway Code and follow its advice.