Motoring Industry throughout the years

Motoring Industry throughout the years

The year 1866 is widely considered to be the birth of the modern motor vehicle. A date which transformed how we transport ourselves and goods. And the start of a long-lived love affair between human and car. In just 131 years vehicle engineers have transformed the car into a technical wonderland. Cars with on-board computers, parking sensors and in-car infotainment systems are a thing of the norm.

Automobile history actually starts as early as 1769 where steam engine carriages were used for human transport. In 1806 cars began to be powered by fuel gas using an internal combustion engine. Then in 1886 we saw the launch of the Benz Patent-Motorwagen designed by German inventor Carl Benz. This ran on a modern gasoline- or petrol-fueled internal combustion engine.

Scaled versions of this steam-powered design, capable of carrying people and cargo were introduced in the late 18th Century. The fardier a vapeur steam powered tractor was demonstrated in 1770 by designer Nicolas-Joseph Cugnot. Unfortunately, the design was not practical and never made it to production in France.

From China to France and now Great Britain. In 1784 William Murdoch had built the first working model of a steam carriage. Then, in 1801 Richard Trevithick was running a full-sized vehicle on the road. These vehicles were extremely fashionable at the time and so development was a focus point. Over the next decades, innovations such as hand brakes, transmissions and improved steering were developed.

However, this trend was halted when legislation was imposed in 1865. The law insisted that all self-propelled vehicles on a public road must be accompanied by a man on foot waving a red flag and blowing a horn to alert people the vehicle was approaching. This effectively killed road auto development in the UK for most of the rest of the 19th century; inventors and engineers shifted their efforts to improvements in railway locomotives.

Meanwhile, the first automobile patent was granted to Oliver Evans of the USA in 1789. 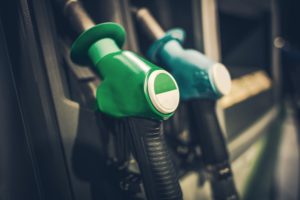 In 1815 Josef Bozek, a professor at Prague Polytechnic built an oil-fired steam car. A few years later in 1838, Walter Hancock a builder of London steam buses built a four seater steam-powered version of a horse-drawn carriage. Meanwhile, a known automobile inventor in Germany Karl Benz received a German patent in 1886.

About 1870, in Vienna, Austria (then the Austro-Hungarian Empire), inventor Siegfried Marcus put a liquid-fueled internal combustion engine on a simple handcart which made him the first man to propel a vehicle by means of gasoline. The first carriage-sized automobile was invented in the United States in 1871. Inventor Dr JW Carhart was a minister in Wisconsin and produced a steam powered vehicle suitable for use on existing wagon roads.

Some class the first ‘real’ automobile produced by Amedee Bollee in 1873 France. The creation was a self-propelled steam vehicle designed to transport groups of passengers on the road. Meanwhile, in 1879 American George B. Selden applied for a patent including the use of a steam engine in a 4 wheeled car. The patent was eventually granted in 1895 after a series of amendments.

In 1895 Britain, one of the first recorded petrol-driven vehicles was built in Birmingham by Frederick William Lanchester. Lanchester also obtained a patent for the disc brake.

Development of steam-powered automobiles continued through until the early 20th Century. The popularity of petrol engines increased in the late 19th century marked the end of steam vehicles.

By 1900 cars had begun to be mass produced in France and the United States. In Europe, the first motor car production was in 1897 by Czech company Nesselsdorfer Wagenbau. 1889 saw the first company formed exclusively to produce cars. The company was named Panhard and popular 21st-century brand Peugeot followed just two years later

In just a few years technologies were being developed left, right and centre by hundreds of producers across the Western world. Automobiles competed for decades between power sources like steam, electricity and petrol. Petrol was leading the developments as the most economical source of automotive power. 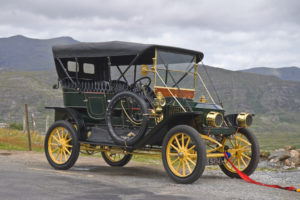 Edwardian times are also referred to as the brass era relating to the abundance of brass used in manufacturing in the USA between 1905-1914. During this time the popularity of the high-wheel motor buggy was rife, with over 75 producers in the USA. In 1912 all steel car bodies were being pioneered by companies in the UK and USA. It would be another two decades before all-steel bodies would be standard.

From the end of WW1 in 1919 until the famous Wall Street crash in 1929 the front-engined car dominated popularity. It featured a closed body and standardised controls. The best selling model of the era was the Ford model A (1927-1931). More than 4 million were produced for the era.

During the recovery after World War II around 1946 fully closed car bodies began to dominate the car sales market. The introduction of the saloon and sedan body styles which included a boot at the rear for storage. By the end of the era wing mirrors and headlights had begun to be integrated into the body of the car. This style has been the form that has been brought forward into modern day motoring. 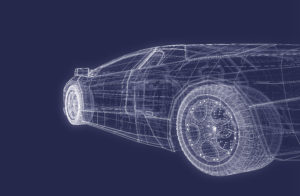 Counted as the past 25 years, we have seen cars develop dramatically in a relatively short time frame of the last 25 years. Standardisation of features, platform sharing and CAD (computer aided design) have been the route of these developments.

A proliferate development was the front and all-wheel drive, the diesel engine and the invention of the fuel injection. Most modern passenger cars offer front-wheel drive with transversely mounted engines. All of the above-mentioned revolutions had been attempted in previous eras without success and design of the front wheel drive was even considered radical in the 1960s.

Body styles have developed in the modern era with the hatchback, sedan and sports utility vehicle dominating the sales tables. These designs have been the backbone behind newer additions to the market such as SUV’s, MPV’s and pick up trucks.

Rising fuel efficiency and engine output have been relatively new considerations in the modern era of motoring. This is due to concerns over automobile emissions and the environment.

In 2009 China became the world’s absolute car manufacturing leader boasting more production that all of Europe.

We’re looking forward to seeing what the future brings to motoring and the new developments with driverless cars coming soon.